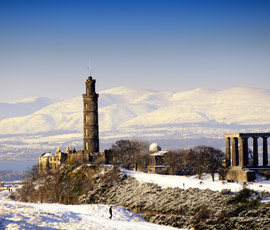 The wild weather that has battered Scotland was continuing today (Thursday 8 December) – with storm-force gales gusting above 100mph.

The Met Office said farmers in Scotland were facing more days of disruption until at least the weekend as severe winter storms crossed the country.

“It’s pretty wild out there at the moment across much of Scotland, especially in the north where wind speeds have risen above 100mph towards the Orkneys,” said Met Office forecaster Helen Chivers.

Northern Ireland has also been hit with gusts of 89mph and gale force winds were affecting much of the rest of the UK.

However, Ms Chivers said temperatures remained unseasonably mild for the time of year: 7C in Glasgow and 11C in London.

The strong winds were expected to die down by Friday night when temperatures were forecast to plunge to 1-3C in Scotland. Further snow flurries were expected to affect Scotland and parts of north-west England.

The unsettled weather was forecast to continue next week with a mixture of sunny spells, wind and rain.

A spokeman for livestock farmers W R Baillie and Co in Orkney, said: “It’s cold, wet and windy and it’s been very difficult. We have experienced storm-force winds, which is very scary.

“All the animals are inside, but it’s very harsh on the sheep, especially now that the tups are out with them.”

Roads were flooded making driving conditions treacherous in the area, the spokesman added.

Livestock farmer Tom Johnston, of Cottown Farm, Huntly, Aberdeenshire, said he was making preparations on farm for the stormy weather.

“We have been closing doors and buildings and checking roofs,” he said.

“We have had about 4cm of snow. It’s very windy at the moment and if it gets colder and snows again it’s going to be difficult.”

• Winter weather: your views and experiences.