A farmer has been reunited with four of his missing goats after they were stolen during an overnight raid.

Jim Arnott told Farmers Weekly he was “absolutely delighted” that his female pedigree Boer goat, named Scarlet, and her triplets had been found safe and well. 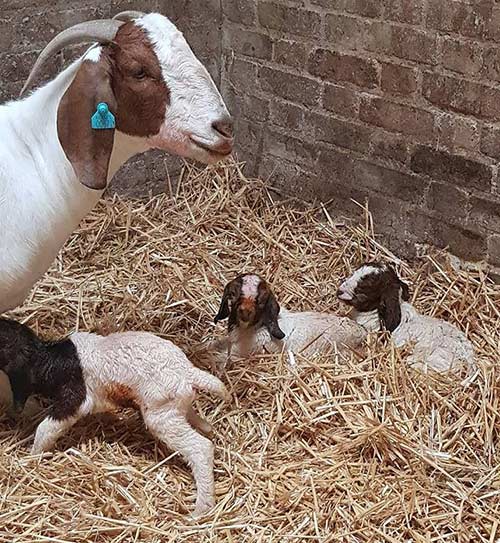 But a fifth animal stolen in the raid – a three-day old Belgian Blue cross male calf – is still missing.

Mr Arnott, who farms in Kings Langley, Hertfordshire, has appealed to anyone with information on the whereabouts of the calf to come forward. He described the animal as “predominantly white with merle blue splashes”.

He said: “We were devastated to find the goats were missing. My children were inconsolable. How do you explain something like this to them?

“We have got to try and stop this. More people need to be aware that this is going on. Sadly, sometimes the people who are stealing these animals think they are doing a good job – but they are not.”

The goats were taken from a shed at the farm some time between 11pm on Thursday (1 November) and 5am on Friday (2 November).

Following the raid, Mr Arnott made an emotional appeal to the public on Facebook and in his local newspaper for help to find the stolen animals. The Facebook appeal went viral – it was shared more than 35,000 times and received nearly 5,000 “likes” and comments.

Following the appeal, Mr Arnott was contacted by someone via Facebook who said they had obtained the goats after responding to an advert.

“I believe the goats were stolen to be sold on somewhere, but I always hoped I would get the goats back because they are quite distinctive,” he said. “We still haven’t got the calf back though, so please help if you know where it is.”

A dehorning iron and castration pliers were taken in a previous raid on the farm, which happened two to three weeks earlier. It is not known if the two raids are linked.

Mr Arnott is now reviewing security at his farm and installing CCTV cameras in a bid to deter further attacks.

“We are a family farm. We have never felt the need to barricade ourselves in. Everyone is on edge,” he said. “We have got to be vigilant now. It’s disappointing this has happened. I don’t feel like I can trust anyone anymore.”

Hertfordshire Police has appealed to anyone with information about the thefts as well as the whereabouts of missing calf to call 101.