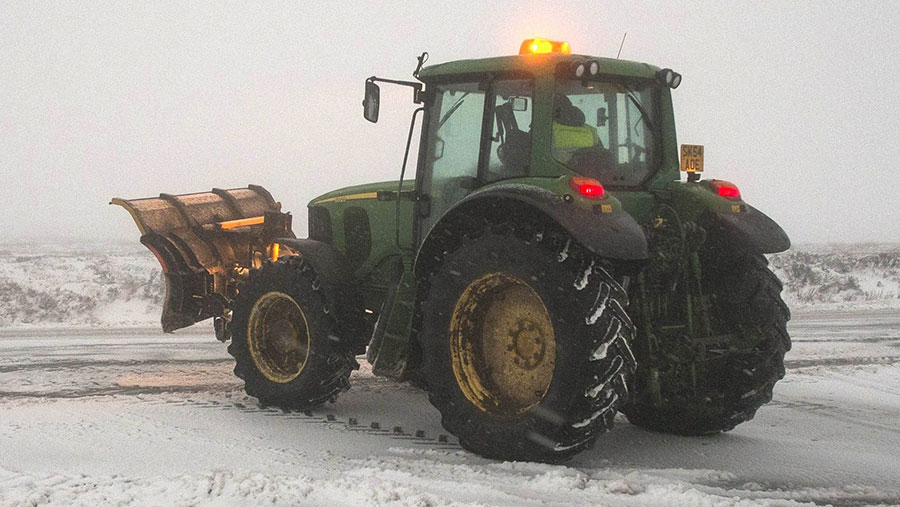 Farmers have been labelled “legends” by grateful members of the public for their efforts to clear snow from roads.

Hundreds of farmers across the country have been working alongside emergency services and councils to clear snow drifts from impassable roads.

The public have paid tribute to farmers on social media, labelling them “legends” and “heroes” for assisting with snow clearance.

See also: 15 frustrating things about snow on the farm

In Cambridgeshire, keen runner Paul Hammond uploaded a video on his Twitter account (@mr_paulhammond) of a farmer using a telehandler with a snow plough attached to clear a road between Isleham and Fordham.

In Northamptonshire, the BCH Road Policing (@roadpoliceBCH) team uploaded a video of another farmer using a Manitou telehandler and bucket to clear a snow-filled road between Northborough and Peterborough.

Please be aware Peakirk Road between Rippons Drove and Church Street, Northborough, Peterborough is impassable unless in 4×4. Please do not attempt to get through in a car, numerous vehicle towed out this morning having got stuck in snow. 1774/1147. pic.twitter.com/tDZRj7DxjV

Officers said the road had been unpassable without a 4×4 vehicle, adding that numerous vehicles had been towed out after becoming trapped in the snow.

NHS workers have also tweeted their appreciation to farmers for their efforts.

The East of England Ambulance Service told how farmers had cleared drifted snow to allow a team of three to get to Saxmundham and dispatch more ambulances.

#Suffolk farmers (and I’m sure Essex, Norfolk, Cambs, Beds and Herts too!) you are LEGENDS! Thank you for all your help, you are absolute stars #heroesdontwearcapes #BeastFromTheEast https://t.co/DH6ba0tGWq

We opted for the A62 Home. Local knowledge was working a charm (I felt smug) until we got to this corner. Haven’t moved for an hour! Two farmers in tractors working like dogs. legends. #nwLC18 pic.twitter.com/HrWwJtM4eV

Elsewhere, about 100 volunteer farmers in Hampshire and 50 in Surrey are working with snow ploughs attached to tractors to supplement the work of the highways winter fleet.

In Monmouthshire, south Wales, 19 farmers are working with council teams to clear roads in the county.

Thank you to our farming community, we have 19 farmers and tractors undertaking snow clearance this snow will be picked up and deposited onto open spaces.#staysafe @NFUCymru @Gwentyfc pic.twitter.com/JdRxiM3pVk

In Scotland, Agrovista agronomist and first generation farmer Ben Lowe reported that farmers were using tractors to clear snow in front of firefighters attending an emergency call in East Lothian.

Farmers of Uk helping out our @UKEmergencies over the last few days of extreme weather. Uncle who is Fireman at Dunbar sent me the video. 1000’s of people braving the elements to keep people safe! #Farm365 #beastfromtheast #volunteers #makeadifference #firefighters pic.twitter.com/qf758sqta5

Watching from afar in the Ukraine, expat agronomist Mike Lee suggested that farmers clearing snow from roads should be considered a “public good” under Defra secretary Michael Gove’s Brexit vision.

Watching farmers across the UK out and about today, clearing roads from snow and pulling cars out of ditches, is this some of the “public good” Michael Gove was referring to?