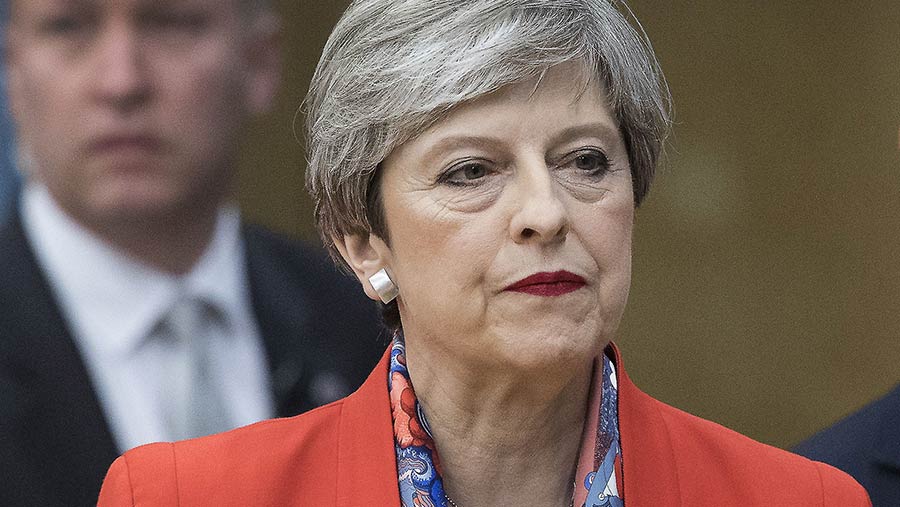 Farmers are bracing themselves for months of further uncertainty over Brexit after the UK voted for a hung parliament in the general election.

The Conservatives won the most seats, as expected, but not enough to form an overall majority. Tories sources said leader Theresa May would fight on despite facing calls from some in her party and opposition leaders to step down as PM.

It is widely expected that the Conservatives will attempt to form a minority government with the Democratic Unionist Party, which is closely aligned to Tory ideology.

See also: What farmers want from the next government

But shadow chancellor John McDonnell told Radio 4 that Labour would also be seeking to form a minority government with the Scottish Nationalist Party and others.

With Brexit negotiations due to start with the EU in 10 days, former Ukip leader Nigel Farage warned that the country could see “a significant backslide on Brexit”.

Farage: ‘May is toast’

He told ITV News: “Theresa May is toast, it’s just a matter of time. Quite frankly, I don’t know what’s going to happen here.” Mr Farage also warned the turmoil could end in another election this autumn. He also raised the spectre of a second vote on the EU referendum.

The pound plunged in value 2% against the US dollar and 2.3% against the euro as financial markets reacted to the election uncertainty.

Farmers Weekly has gauged some early reaction from farmers to the shock election result, with many urging whoever wins power to press on and secure a good Brexit deal for the UK agricultural industry.

“This is devastating for farmers and the country. This will cause chaos where previously there was calm. We now might get a Labour government forming a minority government.

“I have three daughters at three different universities and they were all telling me their friends were voting Labour so that they could wipe of £40,000 of their student loans debt.

“This result will just create further chaos and uncertainty in the agricultural industry. I’m terrified for the future of our farm over the prospect of land taxes and compulsory purchase for housing.”

“I would also like to AHDB gone and replaced with a marketing board set up similar to what they have in Ireland and New Zealand.

“Then we could go forward with a good team that would take us through Brexit. At the moment, I don’t think anyone in the Defra team is very good.”

“I don’t really care who is in power. I still had to get up this morning, like I do every day to milk the cows.

“Labour’s election mantra was “For the many, not the few”. But the new government has got to realise that we are feeding the many.

“If they do not negotiate the right Brexit deal going forward for agriculture, then we may as well just give up.

“Politicians should have spent the last six weeks working out what we are going to do, rather than going around on buses slagging each other off.

“The Conservatives are going to have to negotiate a good Brexit deal for us going forward.

“They will have to maintain the payments and make sure there is a big enough carrot dangled in front of farmers.

“If they don’t keep the payments high enough, more farmers will decide to farm without subsidy and the environment will lose out.

“Farmers are not just food producers, we are custodians of the countryside looking after the wildlife. But we do need the support to keep the job right.”

“I have always said that if the Blues get in, there needs to be a whole new take on the UK agricultural policy.

“I genuinely feel we need a great deal of thought from across the parties and the likes of the NFU, CLA and TFA. They really need to get their heads together and sort this out.

“Farmers from across all sectors of UK agriculture, whether it is dairy, sheep, are almost being held hostage by the activists who are so anti-farming. At the end of the day, the antis all need us like everyone else. They all need to eat.

“In terms of the arable, first it was neonics and now glyphosate and seed dressings are coming under scrutiny. It’s vital we have continued access to these chemicals if we are going to feed everyone.”

“If the Conservatives do form a government they need to make it as fair as possible after Brexit for farmers to be able to continue to farm.

“We need a level playing field with farmers in Europe and globally. The Conservatives seem to be in favour of keeping glyphosate, which is crucial. Any restrictions on the use of this vital agrochemical would be just another nail in the coffin for farmers.

“In addition, any food that is imported into the UK should be subject to the same restrictions and produced to the same welfare standards that we have to adhere to.

“We don’t want a load of cheap produced to lower standards flooding the UK.”

“We need clarity as to what direction we are going in. The Tories have committed to match the current funding regime until 2022, which is good news.

“However, we need to get Brexit negotiations underway and see where we are heading so I can understand what kind of business we will be running in the future.

“Will we get access to labour? Are we going to end up with tariff-free trade, or not? The whole of our investment decisions are based around whether long-term profitability is achievable.”

“I think the Conservatives are the strongest option as we go through Brexit.

“As a farmer selling wheat, the weak pound is good. However, buying fertiliser and fuel is getting expensive. It’s a double-edged sword.

“We need the security of a good Brexit combined with a national policy in place which will assist the UK farmer to secure the national food supply the country needs.”

“My reaction would be the same whoever had won. We need stability and security in knowing the approach is going to be through the Brexit negotiations.

“We should be aiming for a viable agricultural industry that is able to support and deliver good environmental work.”

“I would feel more comfortable if the Conservatives can form a coalition and get back in. I think they are better for farming.

“I think they will handle Brexit better than any other party and get us a better deal than Labour would have been able to.”