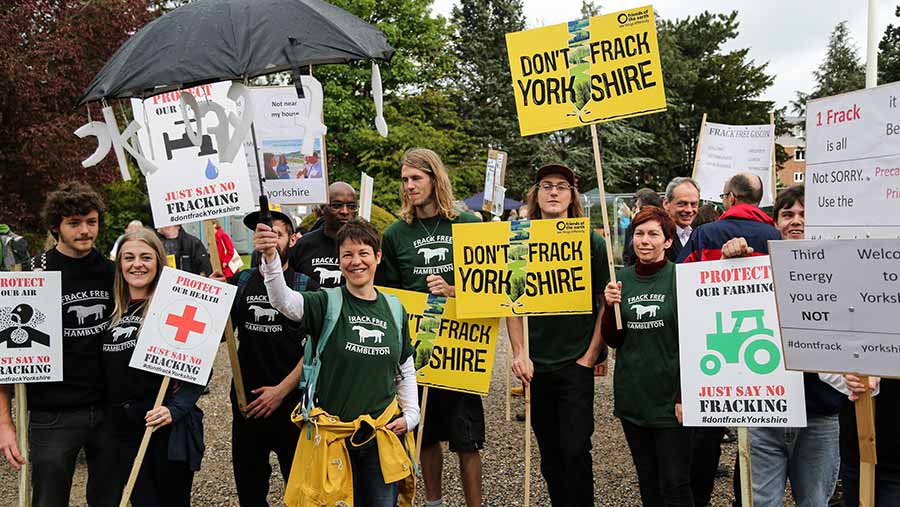 Farmers and landowners have reacted with serious concern to a council’s decision to approve plans for hydraulic fracking for shale gas in Yorkshire.

North Yorkshire county councillors approved plans for Third Energy to frack for shale gas on the edge of the village of Kirby Misperton, near Malton.

An 11-member planning committee voted by seven votes to four to grant planning permission to Third Energy to frack on farmland half a mile from the picturesque north Yorkshire village.

The decision means fracking could resume in England after a five-year hiatus, unless campaigners can bring a judicial review and overturn the council’s decision.

Third Energy chief executive Rasik Valand said the approval was “not a victory” but a “huge responsibility”.

“We will have to deliver on our commitment, made to the committee and to the people of Ryedale, to undertake this operation safely and without affecting the local environment.”

But Mr Valand said people should not expect fracking to begin any time soon as the company must first comply with conditions from both the planning authority and the Environment Agency.

Yorkshire's #fracking decision today. Farmers are right to be worried. No insurance, no liability for long-term contamination. REFUSE IT!

Friends of the Earth (FoE) labelled the council’s decision to frack in Yorkshire as “unacceptable”. FoE campaigner Simon Bowens said: “This is an absolute travesty of a decision, but the battle is very far from over.”

The decision has reignited the debate over the pros and cons of fracking and the possible effects on agricultural land, water and the environment.

Farmers, landowners and industry leaders have also added their voices to the argument.

Farmer and landowner Sir Richard Storey, who has farmed for 50 years at Settrington in the Yorkshire Wolds, said: “You only have to look at the evidence from Pennsylvania, California and New Zealand to see how unpleasant fracking is.

“Farmers who will have fracking on their land will get paid for it. It is quite good business.

“But all we are going to see is lorries going to and fro, transporting huge amounts of dirty water competing with farm machinery, causing great annoyance and distress. There will be pipelines all over the place to capture the gas.

“Whereas now you have fields of wheat, skylarks, cows and sheep, you will have industrialisation around every corner. It’s not fit for rural England.”

Beef and arable farmer Sarah Houlston, who farms 121ha at Northfields Farm, Great Barugh, located about one mile from the proposed site, described fracking as the “single greatest threat to agriculture in the UK”.

She said: “Sixty per cent of the UK is under Petroleum Exploration and Development Licence (PEDL) to various energy companies, such as Ineos and Third Energy.

“The whole of Ryedale is under PEDL licence to five oil and gas companies.

“Ryedale’s economy is based on farming and tourism. We are fourth-generation farmers, but I fear the fifth generation will not be farming in Ryedale if this goes ahead.”

Bill and Cecile Scaling run a mixed 162ha farm one mile from Kirby Misperton, where they farm a 90-head suckler herd and arable crops including wheat, barley, oilseed rape and beans.

Mrs Scaling told Farmers Weekly she was “not happy” with the council’s decision, adding that farmers feared the effects of fracking on the local environment.

“Third Energy are not telling us what they are going to do with the waste, or if there will be any contamination, especially to the rivers,” she added.

“They are only telling us what they want us to know and they are saying fracking is safe. But why have the French banned it?

“Farmers are also unhappy that these companies frack whatever land they want without any permission – and we don’t think that’s right.

“Now that the government has backed these fracking companies, local people might not stand much of a chance. But the protesters will not be giving up without a fight.”

The NFU is concerned about the possible direct and indirect effects of shale gas exploration production on farmland and the longer-term liabilities following decommissioning of production sites.

As such, it is lobbying government to address three “key asks” concerning the phases of operation – exploration, commercial extraction and aftercare.

The three key asks are:

James Copeland, regional environment adviser at the NFU, said: “We understand the local concerns about this particular planning decision.

“The shale gas industry is in a development stage. This is the first phase of a potential nine-year plan.

“We are continuing to engage with the government to make sure these three asks are clarified with the industry.”