Young farmers are the future of the agricultural sector and are coming into the industry by working on family farms, starting new businesses and competing for tenancies.

Some sell themselves through specialisms, others lend a hand as needed, and still more take up any opportunities that come their way to gain vital experience.

Each of this year’s finalists have worked hard to reach a point where their business foundations are sound and they are able to start investigating new ideas to improve the efficiency and stability of their farm.

With Brexit on the horizon, these young farmers are keen to look forward, be innovative and, most importantly, be brave and modify their practices in an industry that can be resistant to change.

The 2018 Young Farmer of the Year finalists

Jacob’s passion and main responsibility is for the sheep part of the enterprise, and he keeps 250 of the best ewe lambs as breeding replacements.

The remaining ewe lambs and all of the ram lambs are finished and sold off, the majority to Dunbia (Sainsbury’s), a new outlet secured by Jacob.

A keen advocate of farming, Jacob has represented the sector at a high level through NFU Cymru and the National Sheep Association.

Growing up in a farming family, Jacob didn’t ever imagine starting another career.

After completing a three-year agriculture diploma at Hartpury College, he decided to return to the family farm.

His father handed him full responsibility of the sheep enterprise in 2013 when he was 19.

“My father lets me learn by my own mistakes and he wanted me to become a decision maker,” Jacob said.

Since taking the reins, Jacob has made a number of changes to improve efficiency and cut input costs, including moving lambing from February to March/April, feeding no concentrates, and decreasing the weaning age from 14 weeks to 12 weeks.

He takes regular blood samples and manure recordings to send to the vet for analysis to find the best treatment method, and alternates wormers to avoid a resistance build-up.

Keeping track of daily liveweight gains also helps him judge the health of his sheep.

“More people are coming to this [technology] but I think more should be doing it,” he said. “I plan on my children and grandchildren farming here so it’s important to monitor things.”

The farm has also invested in a biomass boiler and wind turbine to help year-round cashflow.

Though frustrated details around Brexit remain unclear, Jacob believes leaving the EU could present many opportunities.

With premium brands such as Welsh lamb and unique selling points around animal welfare and food quality, British food will still be highly sought after, he says.

“All farmers can do is manage our costs,” he added. “We can never control the price we get paid for our product, but we can control the cost of creating the product. The rest is out of our hands.”

Jacob’s business also has security from off-farm work such as an equine forage business, contracting and shearing.

Improving on-farm efficiency even further is one of Jacob’s goals, with the commercial suckler herd set to be overhauled in the next few years.

“I am happy to make changes and be brave and thrown caution to the wind,” he said.

He also hopes to apply for a Nuffield Scholarship in the near future, and looks forward to travelling abroad and studying other agricultural systems and practices.

Taking up opportunities with the NFU, National Sheep Association and Young Farmers’ Clubs has increased his confidence, and he plans to continue to speak up for farming.

“You can’t just sit and complain about farming, you have to put yourself and your thoughts forward to try to make a difference,” Jacob said.

“It’s important that agricultural boards have younger members involved, because it’s all about our future.”

“Jacob’s good farming practices have led to great results for his business and he shows eagerness to continue maximising efficiencies. His passion for getting involved in farming politics is outstanding.” 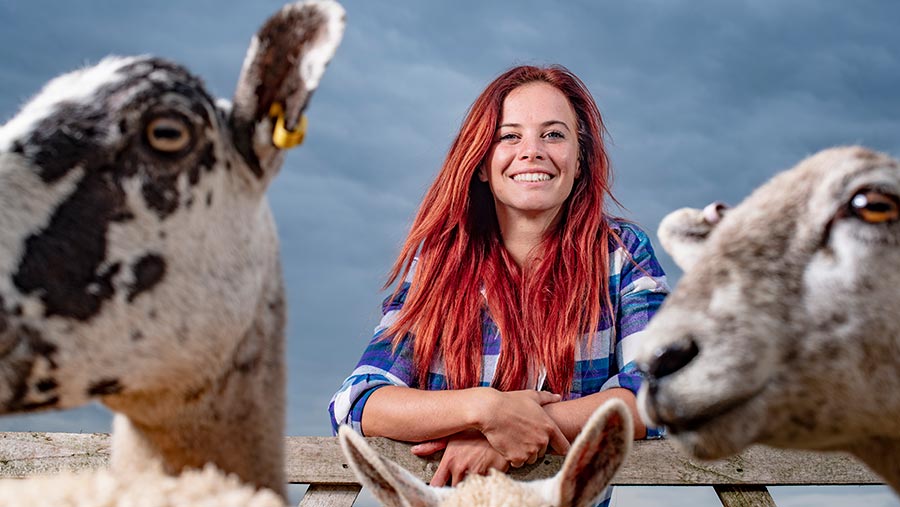 Hannah Jackson grew up on the Wirral and describes herself as a “townie” turned shepherdess who has jumped at every opportunity possible.

She has bought land in Carlisle, Cumbria, increased her own flock of commercial mules from 20 to 120, been chosen as a Next Generation Ambassador for the National Sheep Association, and built up the Red Shepherdess brand across Twitter, Facebook and her own website.

Hannah was set to start a master’s degree in marine biology when she saw a sheep giving birth for the first time and farming became the new goal.

She sent emails to farmers asking for work experience, and when a Keswick hill farmer offered her a week’s stay, she ended up staying for nine months.

“I soaked up as much knowledge and as many skills as possible,” she said. “I trained up a border collie while I was there and then my parents bought him for me as a surprise birthday present.”

From January to May she travels around the UK taking on lambing jobs, as well as lambing her own sheep.

For the rest of the year she focuses on farm relief work, general contracting and her own diversification projects.

“It has been hard to establish myself and it took some time to get people to take me seriously, but you just make it work,” she said.

The variety of Hannah’s roles means she is feeling fairly secure about Brexit, because she thinks employers may be shifting from full-time staff towards contractors for specific jobs.

But she said the industry is facing a “terrifying” time, especially sheep farmers who are “burying their heads in the sand” and failing to prepare themselves, particularly about subsidies.

“Some people aren’t improving the efficiency of their business because they aren’t making any changes or trying new things,” Hannah said.

“Costs need to be cut massively and productivity needs to go through the roof. This could cut the sector in two.”

Another issue that Hannah wants to focus on is improving connectivity between “townies” and farmers to improve support for the agricultural sector.

“Why should we expect the public to back us if they don’t understand what we do or why we do it?” she said.

“It’s our responsibility to connect with the public and share the reality of farming.”

To promote the sector and lamb as a dish, Hannah is starting a lamb box scheme, which includes a brochure full of recipes and information about how the sheep were raised and fed, aiming to box 50 lambs in 2018.

She also plans to develop the Natural Leaders programme, started with her parents, which uses sheepdog training sessions to improve leadership and teamwork skills for professionals.

Getting her own farm isn’t a priority, as Hannah plans to continue working for the interests of the industry and use her brand and influence to get the public’s attention and improve agriculture’s future.

Hannah explained: “I believe there isn’t another industry as strong, supportive, hardworking and determined as ours, so I want to make sure that the general public start noticing this.”

“Hannah is a hugely engaging individual who has achieved, against the odds, her dream job. Her passion for promoting British farming to the public is inspirational and her determination is commendable.” 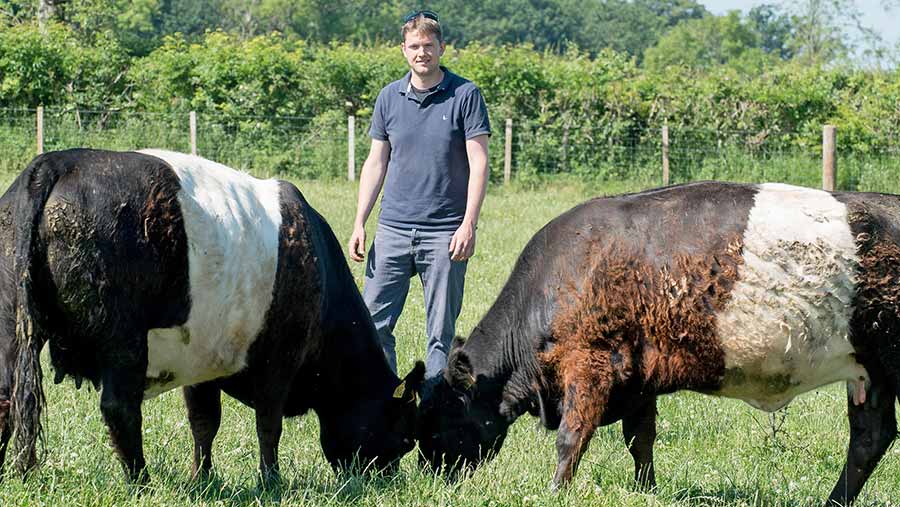 Fond of cattle, he bought 10 pedigree Belted Galloway cows in 2014 and was awarded a Scottish government grant to expand it and increase viability.

The grant enabled him to double the herd, improve the farm’s fencing and holding pens, and purchase a mobile cattle crush for quicker, safer and stress-free handling.

This hardy breed was chosen so the cattle could stay outside year-round and not take up too much of Matt’s time while he focused on the arable enterprise.

Fourth-generation farmer Matt grew up on the family farm in Fife and studied agriculture at SAC Edinburgh.

Returning home, Matt knew he had to adapt the business into a more viable set-up.

To build up his own capital, Matt started EM Waldie Contracting in 2014 and offered ploughing, carting and ground preparation services, which justified buying a bigger tractor and combine harvester.

4Front Farming was created in 2017 after a neighbouring farmer approached Matt to start working with him and two other landowners.

The three landowners and Matt’s parents became directors of the cooperative and Matt became the full-time manager.

Matt consults the directors when selling crops, but makes day-to-day decisions, plans the rotation, manages the workforce and sets a budget for each year.

He credits shopping around for products and economies of scale for cutting costs, and was able to save 25% on chemicals and seed during its first year of trading in 2017.

“The hardest part has been having confidence in my own decisions and sticking with them,” Matt said.

“In farming, people are scared of change but it’s the best thing for the industry.”

Bringing four businesses together puts 4Front Farming in an “excellent” position to weather the storm of Brexit, says Matt.

“4Front is quite a rare set-up in Scotland but I think there will be more like it in future,” he said.

Though unsure what will happen with Brexit, Matt believes cutting input costs and making farming more efficient with 4Front can only help, especially if farm subsidies are at risk.

“In my opinion, farmers need to work together now more than ever because the margin for profit is so tight,” he added.

Living near the affluent area of St Andrews, Matt has found people will pay a premium for locally produced beef, and he has a couple of selling options to explore.

One is private meat box sales, but he believes he will need to build up a strong customer base before seeing a good return.

The second is selling to a local Michelin-starred restaurant, which has taken an interest in Matt’s products.

With 4Front Farming, Matt’s main aim is to save money and make a profit.

Helping the public understand farming is important to Matt. As well as holding farm talks as part of the Linking Environment and Farming initiative, and hosting agricultural ministers, he welcomes hundreds of schoolchildren on farm annually with the Royal Highland Education Trust.

“By teaching them about food and how it is made, there will be greater understanding for us farmers,” said Matt.

“The future of British farming lies with the next generation.”

“Matt has been instrumental in delivering the concept of 4Front Farming, an innovative forward-thinking arable contracting business, which is well placed to scale up and achieve further savings and better returns for the growers.”

These finalists represent the brightest young talent in our industry. The world of farming is changing and this next generation of farmers will shape its future. The skills, passion and dedication demonstrated by these young farmers are truly inspiring and we are proud to support them.