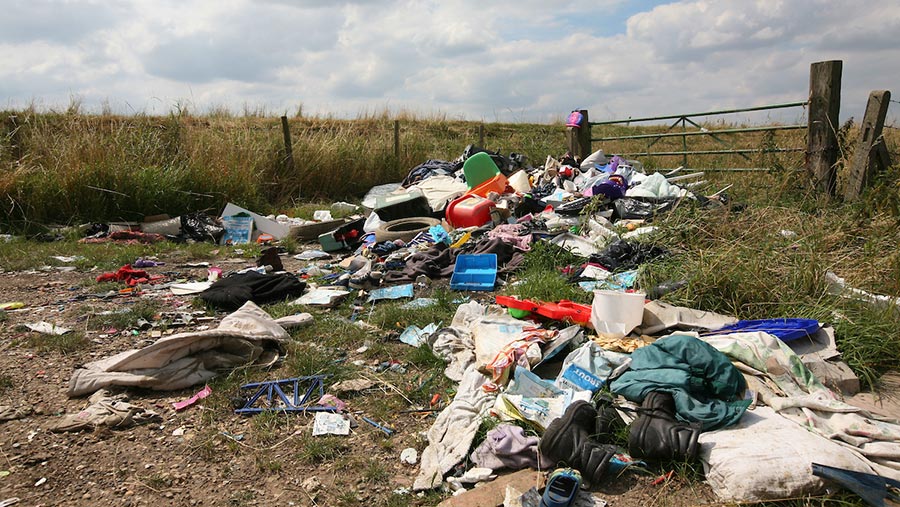 Farmers have shared pictures and videos of fly-tipping as part of renewed efforts to illustrate the extent of the problem in the countryside and force tougher sanctions for offenders.

A tweet from the NFU asking for evidence of waste dumped illegally has prompted replies from dozens of fed-up farmers.

A deluge of pictures showed building material blocking country lanes, black bin bags discarded in hedgerows, and even a small boat on a trailer, left on the side of the road.

The NFU said: “The quicker we tackle this continual blight on our countryside, the quicker farmers can concentrate on what they do best – caring for the environment and producing the nation’s food.”

👊 We want to show just how big of an issue #FlyTipping is. If you’ve got pictures or videos that you’re happy for us to use, share them below ⤵️ pic.twitter.com/bOO80UNmyq

The union has created a video using the images which will be shared across social media, to show politicians and the public the “true-scale of fly-tipping”.

The NFU said the response from farmers had been phenomenal.

“Generally, it’s building or household waste, but we also get a surprising volume of cannabis-related dumping, too.

“The problem has certainly escalated in the last year, presumably as a result of people doing more in their homes and finding it more difficult to access council waste tips – an issue I’ve raised with my MP, and would encourage others to do so, too.”

Mr Stanley said trail cameras he put up to catch fly-tippers in the act were stolen.

The farmer urges everyone in agriculture to report all incidents, to help direct more resources to rural policing and make sure local authorities do more to tackle fly-tipping.

“Fly-tipping is a blight on our shared natural environment, as well as an ecological hazard,” Mr Stanley added.

NFU deputy president Stuart Roberts said: “Every day, I hear how farmers’ fields are being bombarded with rubbish being illegally dumped.

“It’s extremely costly and time-consuming to remove, is dangerous to human health and harmful to wildlife and livestock.

“The NFU’s new Levelling up rural Britain report highlights how farms and rural communities have increasingly become the target of criminal gangs, with those areas continuing to receive lower levels of police funding, per head of population, than urban areas.”