Johann Tasker reports on the Young Farmer of the Year finalists, who have taken their first steps on the farming ladder and are well on the way to building successful and thriving businesses.

The 2017 Farmers Weekly Awards Young Farmer of the Year finalists are: 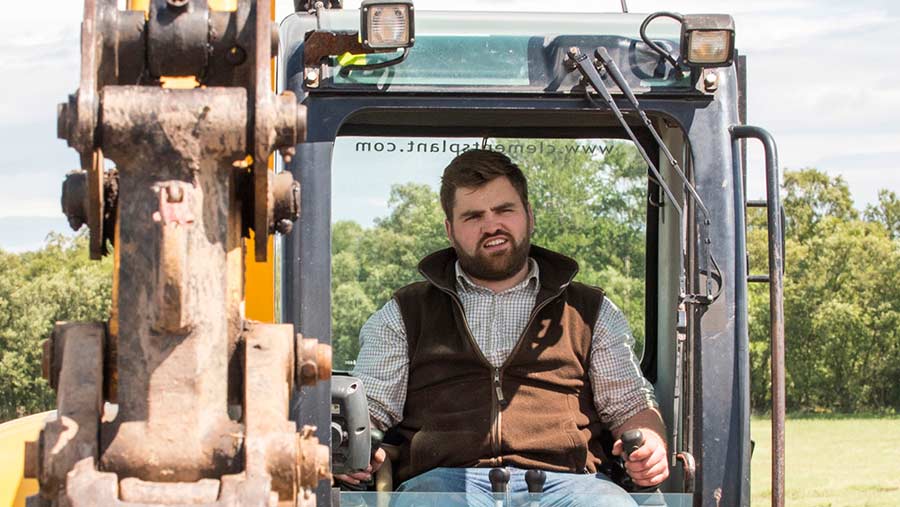 James worked in Australia after graduation before returning to the family farm. Investing heavily in technology, he has expanded the business to include an anaerobic digester and contract farms a neighbouring 570ha.

“My father Ian and his brother David used to farm together as a partnership until August 2013,” he explains.

“They decided to split the business to help the younger generation of the family take it in the direction they wanted to go.”

James says his objective has always been to be the biggest and the best at what he does – not necessarily by increasing the area farmed, but by increasing the size of the business so it can benefit from synergies and economies of scale.

Realising an anaerobic digester would fit well with the existing arable enterprises, he obtained planning permission and the plant was finally commissioned last August. It produces 500kW of electricity which is exported to the national grid.

Local land prices of up to £20,000/acre mean limited opportunities for expansion.

“Competing with big farms for land is challenging,” says James. “I also did not see the point in spending all that money on land when average returns wouldn’t even pay the interest.”

Anaerobic digestion has proved to be a lucrative way of increasing returns without expanding the farm.

But James says with hindsight he should have let someone else manage the project rather than trying to do it all himself.

“During the winter months, it wasn’t so hard – but once it started becoming springtime and I was tied up on machinery for sowing and planting potatoes it became extremely hard and took its toll on my stress levels.”

The future, though, is promising. While the AD plant was being commissioned, James was approached by a neighbouring farmer who asked him if he would be interested in contract farming some 570ha of nearby land.

“I felt great pride,” says James. “Opportunities like this are one in a million in our area. It was as if our hard work and dedication to doing as good a job as we can was being noticed and appreciated – we accepted straight away.”

More crops are sold forward and, to further optimise returns, the business has invested heavily in GPS and auto shut-off.

“All in all, I feel I am the right path to creating a healthy business which at one point was struggling due to poor commodity prices.”

James is dramatically enhancing the family’s core business by integrating new projects – including an anaerobic digester generating electricity from his own rye and local waste potatoes, and a contract farming arrangement that provides efficiencies in scale across the farm. 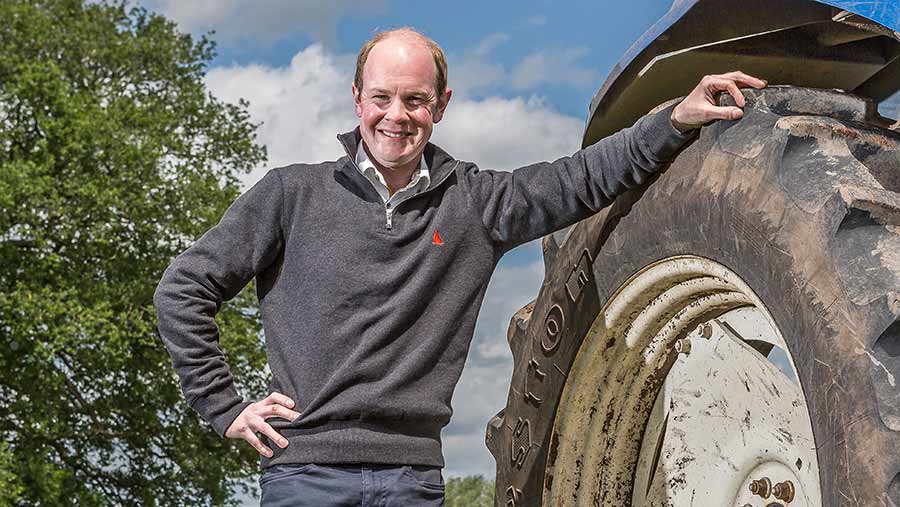 A farmer specialising in anaerobic digesters, Robert is also a serial entrepreneur – starting his own free-range egg business as a teen before selling it to fund a degree course in agricultural business management at Reading University.

Between terms at university, Robert worked for agricultural contractor Cadwaladrs. “It taught me a lot about running a profitable business – and I soon understood that you don’t need brand new equipment to start a business or do a good job. You need knowledge and ability.”

A job in the on-farm biogas industry followed after graduation. But Robert was made redundant after a year. “It was the push I needed to start out on my own and I formed BioG UK at the age of 22,” he says. Seven years later, the business has gone from strength to strength.

Robert now owns his own 249kW anaerobic digestor, with two larger projects under construction. He has used his experience to support other farmers through his own consultancy business and managed to purchase his own arable farm last year.

“It was a redundant farm and needed a complete overhaul, with some fields being fallow for over two-and-a-half years,” he says. “We started with soil analysis, undertook a huge amount of drainage work and had to implement a mass weed control programme.”

Some land is rented out for potatoes, carrots and grass keep. But much of the arable work remains in-house. The farm produces all the hay and haylage required for an on-farm livery run by Robert’s partner Katie French.

Success is an ongoing project, says Robert. But he has turned the farm around. “It’s my proudest and greatest achievement,” he says. “I’m growing multiple businesses off what is a relatively small area and making a sustainable future for myself in farming.”

“I’m proud to say I make money out of farming, which many people warned me wasn’t possible. Through hard work, and being prepared to look at new ideas and diversifications, I have three successful businesses under my belt and I feel confident about the farm’s future.”

Robert thinks big. His business drive and determination has put him at the helm of six companies – soon to be 10. He sweats every asset and constantly seeks ways to keep down costs despite the scale of his investments. 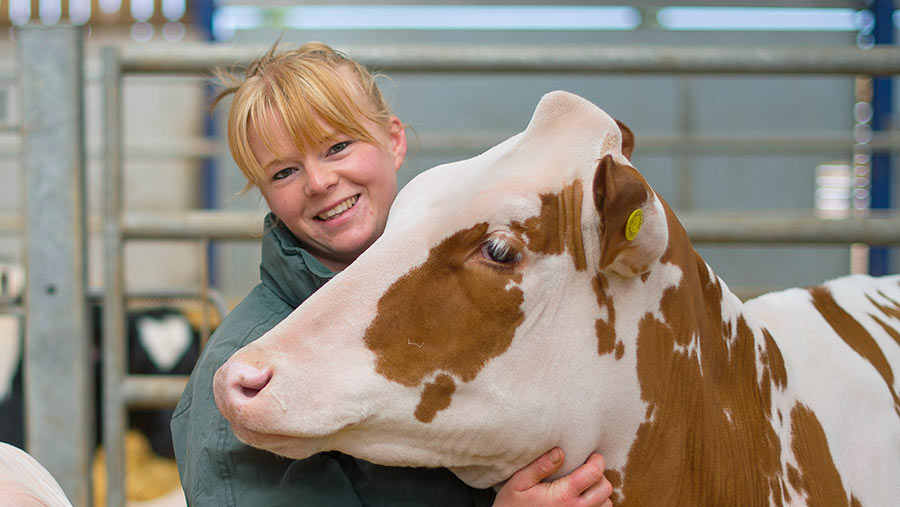 Walking the lines of cattle in Molly’s shed is like a who’s who of pedigree Holsteins: every single animal is either a world-class winner – or about to be.

Molly is founder and owner of Panda Holsteins – a Holstein genetic business breeding and producing animals of exceptionally high quality based on their confirmation, genomics, production and longevity.

Returning home after four years working in Canada for the pedigree show herd Morsan Farms, Molly founded Panda Holsteins by purchasing five embryos from a cow she believed capable of breeding exceptional offspring – and implanting them in five non-pedigree heifers.

Today, she sells embryos and show cattle to six different countries. “The genetics side of the cattle has always interested me,” she explains. “Improving the next generation and helping build foundation cow families to improve the profitability of the business is very rewarding.”

To expand her business, Molly had to convince lenders it was a viable proposition. She needed to borrow money to construct a larger dual-purpose building that would house both cattle for showing and recipients for calving.

“Our bank had never seen a five-year business plan like mine,” she says.

“Throughout the meetings I had to explain that I was not a typical dairy farmer – and Panda Holsteins income does not rely on fluctuating milk prices.”

Having had several “battles” with the banks, Molly secured her first loan at the age of 23 to start expanding the business. And she says she managed to keep within budget despite the industry being at one of its lowest points.

In five years, Molly aims to have a fully established business, with her first loan on its way to being paid off. Continuing to calve 30 heifers each year, she is marketing, showing and selling cattle while developing the Panda prefix internationally.

Success has come quickly but is built on strong foundations. It is hard work and involves long hours. But Molly says she loves what she does, despite having to get up a 4.30am each morning and not finishing until the last feed at 11pm every night.

“With hard work and dedication, I am on the way to fulfilling my passion and my dream of establishing Panda Holsteins as a leading source of the best Holstein Genetics – not only for the UK but across the globe.”

Molly has so many firsts under her belt; from selecting winning genetic lines to exceptional performance standards and unique building design. In just six years, aged only 26, she has become a top world-class Holstein breeder.

“The future of agriculture depends on youngsters coming into the industry and The Co-op is tremendously proud to sponsor the Young Farmer category.

“This year’s entries are exceptional and it is an honour to see the passion displayed by these top farmers – all of whom are 30 or under.”