Four cows have been pulled from a slurry pit in a dramatic rescue operation after they became trapped on a farm in Cumbria.

Fourteen firefighters were called out to the farm near Penrith to rescue the heifers using large animal lifting equipment.

As well as using lighting and lifting equipment, they had to cut away some of the metal slats covering the pit to get to the cows.

Veterinary surgeons Dan Griffiths and Charlotte Pennington, from the Paragon Group practice in Newbiggin, were also on hand to help during the incident on 22 December.

“Incidents like this are a known risk with slurry pits, but they don’t happen very often,” said Mr Griffiths.

“After the cows were rescued and regained their footing, they were absolutely fine. 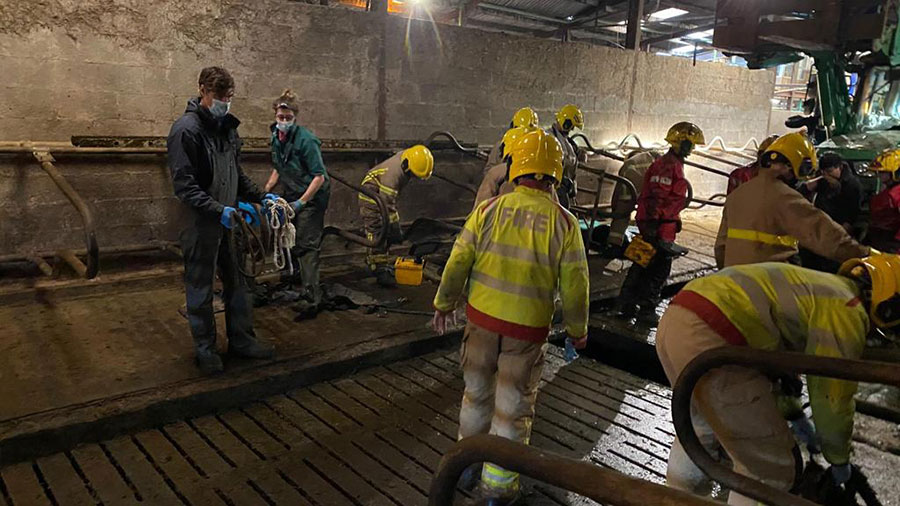 “Quite often an animal in this situation would suffer a lot of stress and would become agitated very quickly, so in a way it was probably a good thing that there were four of them in there – if one was in on its own, it would have been more traumatic for them.”

The cows had been brought into their shed at night, but it was only in the morning that the farmer made the discovery – meaning the cows could have been trapped in the pit for up to 12 hours.

He immediately began draining away the slurry before calling the fire service to lift the animals out.

All four cows were in-calf, meaning that extra care was also needed to avoid losing the calves.

“The big concern when lifting the cows out was if it would put any strain on the calves inside,” added Mr Griffiths.

“Thankfully they didn’t need any sedation, because that would mean the calves would be sedated too. It would mean there would be a much bigger risk of losing the calves or having to abort them, which we would have done as a last resort if we needed to.”

A spokesman for Cumbria Fire and Rescue Service said: “The Penrith day crew and Penrith on-call were called to an animal rescue. Crews were assisted by two vets.

“Four cows had fallen into a slurry pit; crews used large animal rescue equipment and used the farmer and his tractor.

“The cows were successfully extricated through a small opening. Four happy cows in the end.”