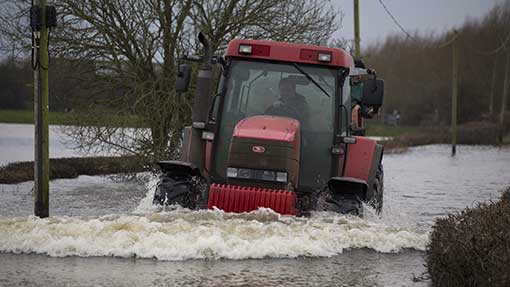 Flood-hit farmers in Somerset have issued an emergency appeal for forage and straw after running out of animal feed and bedding.

It comes as a poll found two-thirds of the British people believe the government is failing to control the flooding that has engulfed the Somerset Levels.

Fodder has been ruined, with maize and silage pits on many farms languishing for weeks under water that has swamped thousands of hectares, much of it since Christmas.

Although livestock have been housed for weeks on higher ground where possible, farmers are now finding themselves forced to evacuate cattle from the area altogether.

You can donate feed, forage or animal bedding through Sedgemoor Auction Centre, at J24 of the M5. Please call 01278 410 278 first to arrange a delivery time.

James Winslade, who farms at Moorland, near Bridgwater, said he had 550 beef cows, calves and fatteners that needed feeding.

Rising water forced Mr Winslade to evacuate 50 cattle to Sedgemoor livestock market at junction 24 of the M5 on Wednesday. He expects to move more animals on Thursday (6 February).

“I don’t know how I am going to feed them,” Mr Winslade told Farmers Weekly. Sedgemoor market was a stop-gap destination that could only hold the cattle for so long, he said.

“I don’t know which way to turn – I don’t know where to go. Nobody is telling me anything. The lorries are turning up and asking where to take the cattle and I just don’t know.”

Some 67% of the British public say the government does not appear to be in control of the flooding situation, according to an ITV index carried out by pollster Comres.

The water had risen by a further two feet, said Mr Winslade. “We had to get my wife and children out and we had to start evacuating cattle, too.”

If the situation carried on much longer, Sedgmoor would have to sell the cattle. “I haven’t got any food to feed them. I’ve been running on adrenalin for 36 hours.

“We couldn’t get lorries on to the farm, the water came up so quick. You can’t get 4x4s down here any more either.

“We’ve been shipping cattle out using tractors and trailers and loading them on to lorries on the main road.

Mr Winslade said all his cattle handling facilities were knee-deep in water. Silage on the farm was in almost two feet of water too, he added.

Hay, straw and silage were all needed, said Mr Winslade. Some 7,800 big square bales of hay had been lost and 3,000 bales of straw also were gone.

Other farmers are in a similar situation, although not all livestock buildings are under water.

At Stoke St Gregory, farmer Heather Venn said she was also running out of fodder. Asked how she would feed her suckler herd, Mrs Venn said she didn’t know.

“It is a dire situation and it is getting worse,” she said.

The first emergency supplies of animal feed are due to arrive at Sedgemoor market later on Thursday.

“All our lorries are out at the moment, so we’re taking 2t of beef feed there on a trailer now, which should be there by mid-morning,” said Andrew Power, of millers CMC at Fordton Mills, Crediton, Devon.

“We are going to deliver a further 3t this afternoon on a lorry. It is for anyone who needs it – hopefully it will be enough for a few hundred head of cattle for a few days.”