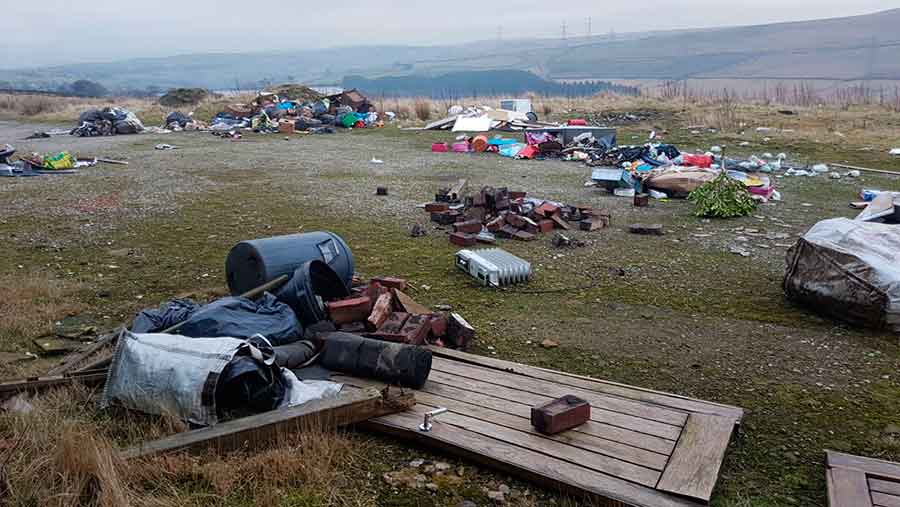 A tenant farming family says they have nowhere to turn for help to remove a fly-tipping eyesore in the middle of their holding.

Beef and sheep farmers Stephen and Rachel Hallos farm at Beeston Hall with their son Sam and daughter Anna on 780ha of land owned by Yorkshire Water.

The rented land, which is predominantly moorland, has a privately owned abandoned barn in the centre of one field.

This is an abandoned privately owned barn in the middle of our fields, needless to say the wind is spreading this lot everywhere. Any ideas of what to do? pic.twitter.com/bmacbEkIIZ

Over Christmas, fly-tippers repeatedly visited the site through a private footpath to deposit waste.

They have dumped old fridges, building materials, children’s toys, empty gas canisters, chairs, doors, mattresses and all sorts of other detritus, north of Ripponden, next to the West Yorkshire/east Lancashire border.

Mrs Hallos said her son Sam, 21, discovered the “fly-tipping monstrosity” when he went to the field to spread manure.

“He just couldn’t believe what he saw. He kept shaking his head in disbelief,” she told Farmers Weekly.

The dilapidated barn is believed to be owned by a man who has left the country and is on the run from police.

Yorkshire Water do not own the land which surrounds the old barn, so it is not its responsibility to clear the waste. Likewise, it is not up to the Hallos family to remove it either.

Some of the detritus is now blowing into a surrounding field farmed by the Hallos family, which is included in their Higher Level Stewardship (HLS) agreement “to improve and maintain hay meadows” for wildlife.

“We are trying to do our bit for the environment and then this happens,” said Mrs Hallos. “It just makes you wonder why. Sadly, fly-tipping is happening all over the country. We need to get a handle on it – it’s costing the authorities millions of pounds.”

“In an ideal situation, we hope someone will just turn around and say: ‘We’ll take it away.’ But it’s going to cost thousands to remove it. We are at a bit of a loss, to be honest.”

The family suspects that organised waste criminals had identified the spot and made repeated visits over Christmas at night.

Mrs Hallos wants the council to install CCTV cameras along the road to deter fly-tipping after the site is cleared.

“You usually relax a bit over Christmas and then prepare for a busy time in the new year, but this has set us back a bit,” she said.

“We just keep picking the rubbish up and taking it back out of the field so that nothing is damaged, either livestock or wildlife.

Dorothy Fairburn, director north at the Country, Land and Business Association,  said: “It is disgusting to see our rural landscapes being blighted by the reckless actions of, to be frank, criminals.

“The CLA has long campaigned for tougher legislation to tackle the perpetrators of fly-tipping.

“This will require a joined-up approach where local authorities, the police and the Environment Agency work together in achieving positive outcomes, and where maximum penalties are given.”

Anyone with information is asked to contact West Yorkshire Police on 101.