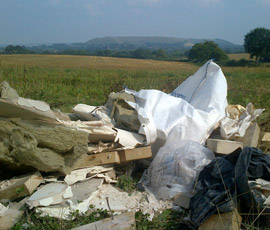 A frustrated sheep farmer has hit out at police and council inaction over a fly-tipping offence on his farm – despite a trail of evidence leading to the perpetrator.

Calum Sutherland, assistant manager at East Farm in Sturminster Newton, Dorset, was horrified to discover a large quantity of building materials strewn across his land.

He found the waste on Wednesday (28 August) lying in a headland in a field of barley that had been harvested the previous week at the 323ha (800 acres) farm.

Mr Sutherland, 22, searched through the waste for any clues to the culprit and found an “Under 3s noticeboard”, a message written on crumpled paper saying “please use the side gate and knock while building work is going on” – and even a children’s tractor book.

After carrying out his own investigation, he was given the name of a local builder who is believed to have carried out the job.

The quick-thinking farmer decided to approach the manageress at his local nursery, Tops Day Nursery in Sturminster Newton, with some of the discarded materials.

“When I found the noticeboard and the handwritten message, I realised that the waste could only have come from a nursery,” said Mr Sutherland.

“I think it’s absolutely outrageous that someone can do this type of thing with impunity. Farmers should not be left to deal with other people’s mess.”
Ian Johnson, NFU South West spokesman

“I took some of the waste to Tops Day Nursery and spoke to the manageress. She confirmed that the nursery had just taken a wall out and the wallpaper and plasterboard in the waste matched the nursery decor.

“She was very apologetic but said she did not know the name of the contractor. I rang the head office and no one would give me an answer to say who was in charge of the building work.”

A spokeswoman for Tops Day Nurseries said: “We are currently carrying out renovations to our nursery in Sturminster Newton.

“We contracted the renovation work to external builders in good faith, and we were shocked to hear that fly-tipping had taken place.”

The nursery was trying to contact the contractor to provide an explanation, she added.

He said the police were “not interested” in following up the crime and the council had offered to charge him to remove the waste because it was on private and not public land.

“I feel the police and local authorities have failed the farm and failed to investigate this properly.

“What should a farmer do? Just roll over and keep paying for waste to be disposed of? I think it’s outrageous that the police cannot act on a criminal act when the evidence is there.

“The agricultural industry cannot keep paying for other people’s waste – we have enough waste of our own.”

He added: “We were lucky that when the waste was dumped it was after the crop had been harvested and straw had been lifted and taken away.

“It could have punctured tyres on machinery and cost us thousands of pounds worth of damage.”

A Dorset Police spokesman said: “Fly-tipping is unfortunately not a police matter and therefore we are unable to deal with it.

“We advise complainants of fly-tipping to look into civil action and contact their local authority for further advice.”

A Dorset County Council spokesman said: “Unfortunately the council (the Dorset Waste Partnership) only has power to remove fly-tipping on public land.

“Fly-tipping on private land is the landowner’s responsibility and they would need to use a contractor to remove it, which could be the council.

“However, we would look to investigate any incident of fly-tipping in conjunction with the police and other agencies, such as the Environment Agency and trading standards, particularly to look at whether there are any trends that would help to identify and prosecute offenders.”

“I think it’s absolutely outrageous that someone can do this type of thing with impunity. Farmers should not be left to deal with other people’s mess.

“I think it’s appropriate that the local authority, trading standards, or whoever, gets down there and sorts this mess out.

“The police may be technically right in what they are saying. However, their response is not helpful. We will be bringing this matter up with them.”

Mr Johnson added that it was incumbent on companies to check the provenance of their contractors and think about any potential consequences.

“Fly-tipping is not just time-consuming, expensive and hugely inconvenient to farmers, but it can be very dangerous depending on what’s dumped. If livestock eat the wrong things or stand on sharp objects, it can be lethal.”