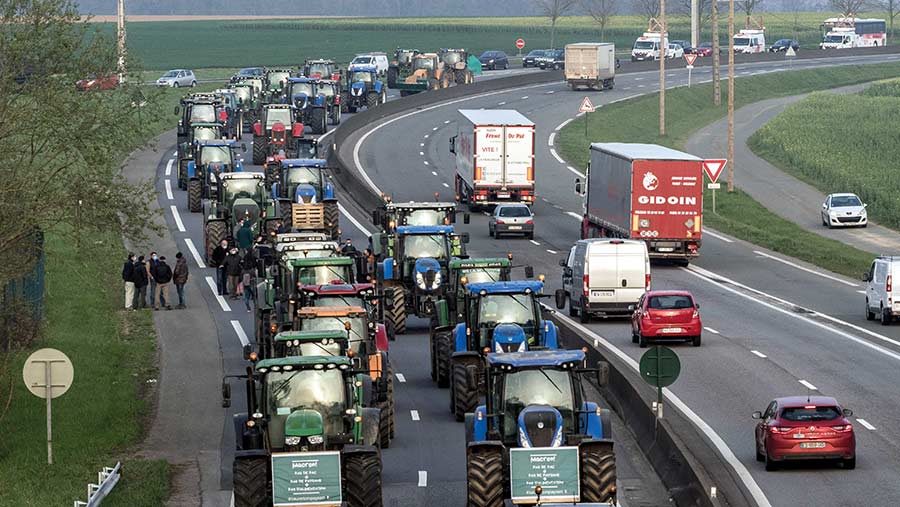 French farmers have staged a series of demonstrations in recent weeks, venting their anger at planned changes to the CAP and potential restrictions on fertiliser use.

Last weekend saw major disruption to roads in the Ile de France region around Paris, as thousands of farmers gave what they called “a first warning to government” about the likely impact of CAP reform.

The new policy being debated in Brussels seeks to move more money from traditional direct payments into rural development, and place more obligations on farmers to engage in environmental improvement and innovation.

Basic payments from 2022-2027 would be capped and targeted at smaller producers.

But according to the main French union FNSEA, and young farmers’ group Jeunes Agriculteurs, such changes threaten to undermine the profitability of basic food production, leading to an exodus from the sector. “France: Do you still want your farmers?” read one poster at the recent protest.

A new national strategic plan is being drawn up as France’s contribution to the ongoing EU debate about CAP reform.

In particular, the FNSEA wants coupled production supports retained for some sectors, especially livestock, and to prevent additional transfers of money from Pillar 1 farm support to Pillar 2 rural development budgets.

The young farmers’ group also wants to see at least 4% of the CAP budget retained for new entrants, saying that 45% of French farmers will have reached retirement age by 2027.

The Ile de France protests followed earlier demonstrations in the French cities of Clermont-Ferrand and Lyon, with tractors used to flatten lamp posts and spread manure on the streets.

The first of these attracted more than 2,000 producers and 400 tractors, according to agency reports, with government proposals to tax the use of nitrogen fertiliser and increase the area of organic production the main cause of their anger.

A new Climate and Resilience Bill would stigmatise the use of chemical fertilisers and failed to take account of the fact farmers have reduced nitrogen use by 20% since the 1990s, said the FNSEA.

The union also points to the low returns farmers are receiving, with just €6 (£5) out of every €100 (£86) spent at retail reaching the primary producer.

It acknowledges that the so-called EGAlim law, which came into effect in 2018, has helped create a fairer balance between producers and buyers, but says it needs to be strengthened further, with producer costs fully accounted for in contracts.