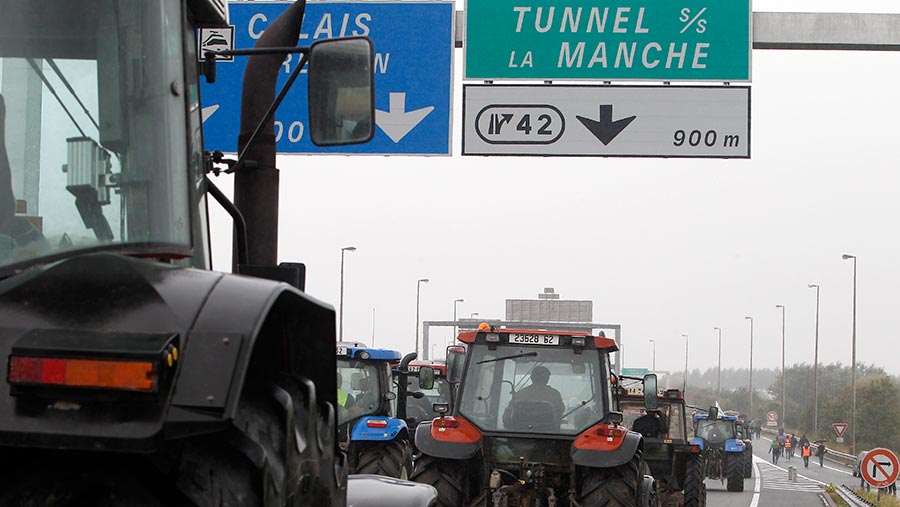 French farmers and lorry drivers blockaded the main motorway route into Calais, demanding the closure of the “Jungle” migrant camp.

The French government has promised to close the camp, which is home to about 7,000 migrants, mainly from Afghanistan, Africa and the Middle East.

But the protesters are demanding that the government fixes a date the closure of the camp, which they say is causing misery for locals and blighting the image of Calais.

According to reports, some 100 tractors and 80 lorries staged a “go-slow” protest – called “Operation Escargot” – along the A16 near Calais on Monday (5 September) leading to the entrance of the Channel Tunnel and ferry terminals.

The protest brought traffic to a standstill along the main artery leading to the ferry port at Calais.

(French National Police: Tractors are blocking the access of the Channel Tunnel in both directions. Avoid the area #Calais #A16)

Vehicles travelling in the opposite direction greeted tractors and lorries with their horns.

Around 10am on Monday, farmers joined locals to form a human chain across the road with many wearing t-shirts saying “I Love Calais”.

(The Channel Tunnel exit in Calais)

French lorry drivers have been angered by attempts by migrants to jump on their vehicles as they seek to cross the Channel to enter Britain.

Migrants have been deliberately causing crashes by throwing large objects at cars and then sneaking around the back and trying to climb aboard lorries.

Farmers also complain that the recent wave of migrant action has damaged crops and farms in the area.

Natacha Bouchart, the mayor of Calais, told the BBC that the situation had become “untenable” and something must be done. “We’re asking for total evacuation of the northern area of the camp,” said Ms Bouchart.

French right wing presidential candidate Nicolas Sarkozy has said illegal immigrant camps in France should be pulled down immediately and replaced by migrant detention camps in the UK.

Mr Sarkozy said migrants who are seeking asylum in the UK should have their applications dealt with by British immigration authorities. However, the Home Office said the idea was a “complete non-starter”.

In a statement, the UK and France have said they will work closer to resolve the problems in Calais.