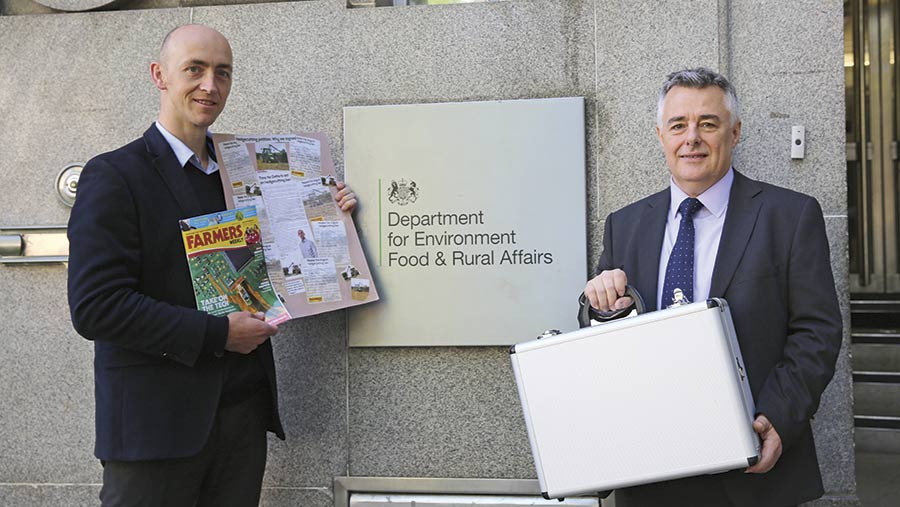 Phil Case and Karl Schneider delivered the petition to Defra

The petition was launched in mid-February and it closed for signatures on 31 March.

It was backed by the NFU, the Country, Land and Business Association (CLA), the Tenant Farmers’ Association (TFA) and the National Association of Agricultural Contractors (NAAC).

See also: Farmers and contractors back our hedgecutting petition

Defra extended the hedgecutting ban in 2015 to cover August “to protect nesting birds”, citing an EU Bird Directive. Farmers or landowners who defy the ban risk cross-compliance penalties to their single farm payment.

The ban has proven deeply unpopular with farm contractors, however, because they are forced to sit out August, losing thousands of pounds in income when they would usually follow the combines around on dry soils and trim hedges.

Conservationists including the RSPB and the British Trust for Ornithology (BTO) say some “red-listed” (endangered) bird species, including the yellowhammer, are still nesting “well into August” and trimming hedges at that time of year risks killing them.

By contrast, the NFU says that its own evidence suggests the only persistent nester in August is the woodpigeon.

The FW petition drew hundreds of responses from farmers and contractors with more than 40 years of experience cutting hedges who said they agreed with the NFU’s stance.

Contractors have been hit hardest by the ban as they rely on August to bring in a large amount of their annual income. If ground conditions worsen after 1 September, landowners can become reluctant to let contractors on their land for fear they will damage soils and margins.

On Friday, Northamptonshire farm contractor Bob Rutt held a rally at his farm to raise awareness of the ban. The event attracted farm contractors from as far as Essex and Warwick.

Mr Rutt said: “The FW petition has been fantastic. The response has shown so many other contractors think the ban is unjustified. Defra should put it back to 1 August on arable land. Full stop.

Farm minister George Eustice told Farmers Weekly he had been following our campaign and understood it was something farmers and contractors feel strongly about.

“I am open to proposals that would allow a risk-based approach, taking account of the prevalence of local populations of vulnerable bird species like the yellowhammer, which are likely to have a second brood later in the summer,” said the minister.

“These will all be issues for policy development as we prepare to leave the EU.”