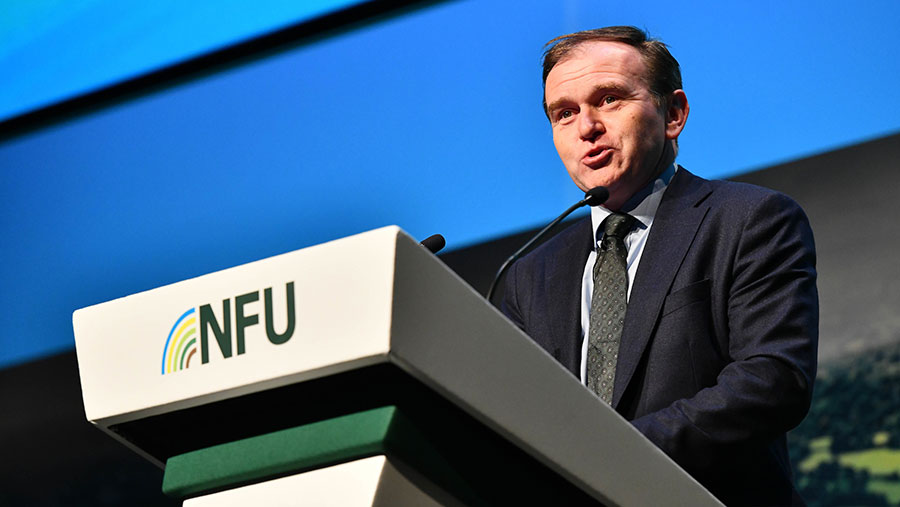 Defra secretary George Eustice’s predecessor but one had a proven track record as a fine speechmaker.

But while Michael Gove was adept at winning over his audience with warm words and whit, on closer inspection, his speeches often contained little of substance.

Mr Eustice therefore had a golden opportunity to make his mark at this week’s NFU conference in Birmingham, to put some much-needed flesh on the bones of the new policy he has been so directly involved in drafting these past four years.

Yet, disappointingly, that detail and commitment were still notable by their absence.

Yes, Mr Eustice set out his farming credentials well enough, talking about his upbringing on a family farm in west Cornwall, and his seven-year “transition” as a Defra farming minister.

And yes, he provided confirmation of what we already know about the failings of the CAP and the government’s desire to replace the Basic Payments Scheme with a “public money for public goods” arrangement.

But, both in his speech and in his answers to farmers’ questions, he somehow failed to inspire or inform – or come up with anything new.

This was no better demonstrated than in his spat with NFU president Minette Batters about the three-crop rule.

Mrs Batters expressed her frustration that, despite the fact the UK has now left the European Union and much farmland is under water, the government is still refusing to grant a derogation.

Mr Eustice agreed that the three-crop rule was “barking”, but insisted the UK was still bound to EU regulations under the Withdrawal Act, so farmers could only apply for force majeure on a case-by-case basis.

Mr Eustice also failed (again) to offer more than warm words about the government’s intention to protect UK food standards from third-country imports, insisting there was “room for a discussion” when it came to matters such as chlorine-washed chicken and hormone-implanted beef.

And while he acknowledged there was a need for more migrant labour to help the sector operate, ultimately this was down to the Home Office.

At least the briefing papers issued by Defra earlier in the week gave a few more pointers as to the likely look and feel of the planned Environmental Land Management scheme.

And a 40-page policy update shone more light on what investments may receive government grants to help farmers improve their productivity.

But there are still huge unanswered questions about how much money will be made available – apart from the general proviso that the current CAP budget of £2.5bn will not be lost to the sector during the life of the current parliament.

To be fair to Mr Eustice, further details won’t begin to be known until after the next government spending review later this year.

But doubts remain about whether farmers will be able to fully recoup their lost direct payments, or whether they will win a better return from the supermarket-dominated food chain.

Doubts remain, too, about Mr Eustice. It is clear he has good knowledge of the sector and a passion for farming.

But summing up the NFU conference on Wednesday (26 February), Mrs Batters spoke of her “disappointment” in the secretary of state for simply toeing the party line and described how she felt “uncomfortable” when pushing him on key policy issues.

Having witnessed his performance in Birmingham, it’s hard to disagree.