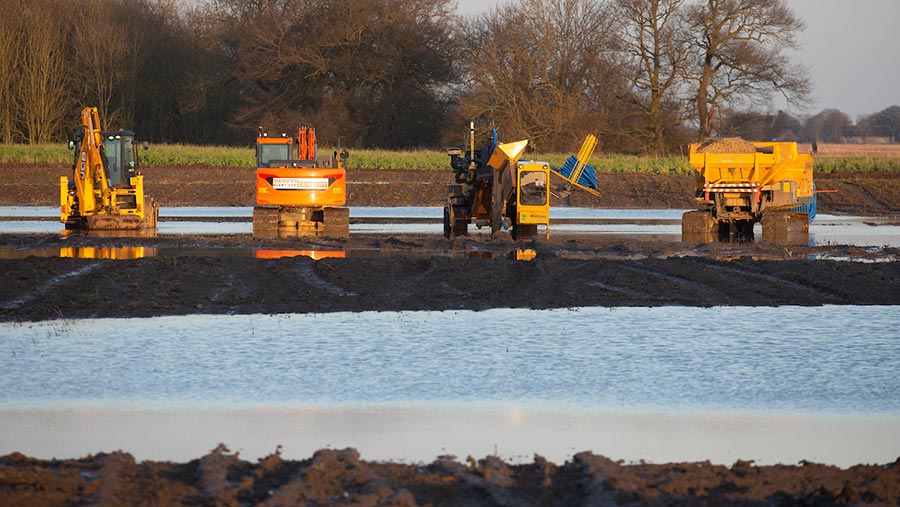 Defra minister George Eustice has ruled out a relaxation of the three-crop rule to help flood-hit farmers – despite describing it as ridiculous, barking and bonkers.

The controversial Brussels rule – which dictates how many crops farmers must have in the ground – will remain in force this year, even though the UK has left the European Union, Mr Eustice told this week’s NFU annual conference in Birmingham.

The UK’s Brexit withdrawal agreement required the government to have a CAP equivalent scheme throughout 2020, said Mr Eustice. “That means we’ve just brought across the CAP, warts and all, for this final year. We will make extensive changes to it next year.”

Widespread flooding has left 35,000ha of farmland under water in Yorkshire and the Midlands, according to the Environment Agency. But an extremely wet autumn and winter has also left farmers elsewhere unable to drill crops.

The NFU and other farming organisations have repeatedly urged Defra to relax the three-crop rule.

But rather than a blanket derogation, Mr Eustice said farmers who had difficulties getting crops in the ground should submit a force majeure application to the Rural Payments Agency.

Growers are required to have three crops in the ground only for a short period between June and August, said Mr Eustice. This means there is still time for farmers to meet its requirements this season, he suggested.

“It is a barking, bonkers rule – I accept that,” Mr Eustice told delegates. “That is why it won’t be staying for long. But for this final year, given the CAP has come across, that is how it works.”

NFU president Minette Batters said farmers were hugely frustrated. “We have left the EU, half the country is under water and [yet] we are still going to abide by the three-crop rule and process thousands of force majeure applications. It just seems absolutely extraordinary.”

Addressing the issue of flooding, Mr Eustice said the government intends to pay farmers to store water on their land – helping to protect towns and cities. Payments will be made as the government introduces its new policy of public money for public goods.

“Using natural flood plains or even retention of water in flooding events downstream is absolutely part of what we are looking at,” he said. “We envisage it being part of our environmental land management policy.”

The government is also looking closely at its farming recovery fund to see if it can be rolled out more widely to help farmers hit by flooding. But farmers should realise that the fund is paid for by reducing other farm support payments, so it is not extra money.