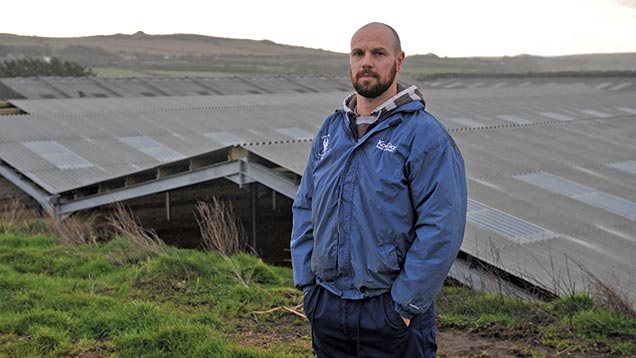 A Welsh dairy farmer at the centre of a row with planners over an unauthorised cattle shed has overcome another planning battle – to create a huge slurry lagoon.

Daniel Harries has been trying to expand his herd to 800 cows at Velindre Farm, St Nicholas, and needed to increase the cattle housing.

He also had to increase the slurry lagoon capacity to 7,700cu m.

But he has been at loggerheads with the Pembrokeshire Coast National Park Authority because he built housing for 300 cows without planning permission.

The fate of that shed has yet to be decided but Mr Harries hopes that securing planning permission for the lagoon will help the case for the cow shed.

When the National Park refused Mr Harries’ application to create the lagoon for his 620-cow herd, he earmarked another site on land controlled by the county council.

This lagoon, which will cover 1ha, has now been given the go-ahead after a council report rejected claims that the smell it would generate would cause problems.

It was satisfied that it would be within acceptable odour limits for 98% of the time.

Mr Harries is hopeful that this decision could pave the way for him retaining the shed at the centre of the planning dispute.

“Quite a few of the Park Authority members had made the point in meetings that it wasn’t the shed they had a problem with, it was the slurry lagoon.

“When they eventually consider planning for the shed later this summer they will no longer have to think about the store.’’

The lagoon will replace a storage facility that was built in 1981 for an 80-cow herd. Mr Harries has already increased the herd size to 620 and plans to expand numbers further to 800.

The current facility only has sufficient capacity for 10 days of storage. “We have managed until now by either spreading the slurry at Velindre or transporting it to our two other farms,’’ said Mr Harries.

He is relieved that planning permission has now been given but upset that the National Park created what he regards as “unnecessary delays’’ and expense.

“There was no reason for the first plan to be refused; it was pressure from a small number of people,’’ said Mr Harries.

“But we are pleased that this issue has now been resolved and that we can get on with farming.’’