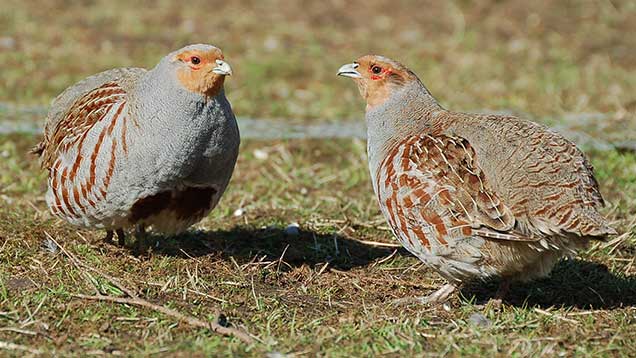 One of the most threatened farmland birds, the grey partridge, could be saved from extinction if research work carried out in the UK was extended across the EU, say wildlife experts.

The Game & Wildlife Conservation Trust (GWCT) believes its Grey Matters project should be used as a blueprint to help reverse the trend of falling grey partridge numbers across the EU.

The new cross-border project is being supported by 20 wildlife organisations across the UK, Belgium, Netherlands and France.

The main driver is to demonstrate that partridge-friendly farming in a modern agricultural context can increase the breeding density of grey partridge (Perdix perdix) and other lowland farmland biodiversity across these EU countries.

Project lead Francis Buner, of the GWCT, said: “Our work on restoring grey partridge in the UK includes the development of novel wildlife-friendly habitats as well as other innovative techniques.

“It has shown such dramatic results in the UK that many European conservation experts wish to use our model as a way of improving biodiversity in their own countries.”

An excellent example of an autumn cultivated uncropped margin, which features charlock and provides a perfect insect-rich foraging habitat for grey partridges and their chicks. (© GWCT)

Researchers from across the EU visited GWCT’s 1,457ha (3,600-acre) grey partridge demonstration site at Rotherfield Park Estate in east Hampshire last month, to see the effect conservation measures were having on partridge numbers.

Five years into the Rotherfield Park project, grey partridges have made a remarkable comeback with autumn stocks increasing from zero in 2004 to a minimum of 108 birds in 2014.

Belgium pays about €30m (£22m) to its farmers through its rural development programme but its birds are still declining.

Frank Stubble, from De Vlaamse Landmaatschappij (VLM) – the equivalent of Natural England in Belgium – said he was impressed by the Rotherfield Park scheme.

“It is vital that we improve our natural environments and we see this collaboration with the GWCT’s research on grey partridge as a way of helping us to achieve our ambition, which is to learn and innovate while not detracting away from production,” he added.

The Grey Matters project is currently applying for EU funding to roll out the blueprint for this scheme across a bigger area.

The grey partridge is among one of the most rapidly declining farmland birds in Europe.

Changes in farming practices have been blamed for rapid declines of this iconic bird, which, according to EU population estimates, has seen a loss of more than 80% since 1970.

Researchers hope to secure funding to enable them to set up demonstration sites similar to Rotherfield Park in each territory to show EU farmers how they, too, could reverse grey partridge numbers.