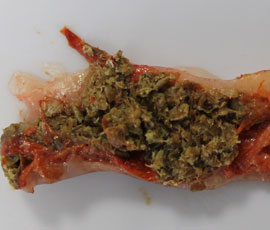 Improvements in the genetic performance of broiler birds, which have seen growth rates increase by 25% over the past two decades, has also led to a loss of intestinal integrity in later phases of the bird’s life.

Addressing the BVPA spring meeting, Luis Canseco, poultry veterinary adviser for Elanco Animal Health, identified three main types of bacterial enteritis (BE). These were clostridial enteritis, dysbacteriosis and cholangiohepatitis, all of which led to increased mortality and loss of feed conversion efficiency.

Spotting the problem early was essential (see box) and treating the entire flock was recommended once 10% of the birds were found to be infected.

Such intestinal diseases were widespread in Europe. A survey by Elanco last year, covering nine EU countries and involving interviews with vets, nutritionists, producers and field technicians, revealed that 23% of flocks were being treated for bacterial enteritis, wet litter or coccidiosis in the late phase.

Another 20% of flocks were “giving cause for concern”. The situation was especially bad in Spain, Portugal and France, while rates of infection were lower in the UK, Italy and Germany.

Mr Canseco said that, for enteritis in late phase, the most common treatment was still antibiotics (86%), though copper, essential oils, natural growth promoters and restricted water were all used to a limited extent.

Data from the UK showed how all gut health problems tended to get worse as the birds got older, with the watery content of faeces, the level of excess mucus and the amount of undigested food in the gut at slaughter all rising with age.

This message was reinforced by Prof Margie Lee from the University of Georgia, USA. She explained that the balance of microflora in the gut shifted as birds got older. Understanding and managing this shift was crucial to maintaining gut health.

Diet also played a key part. For example, birds fed a wheat diet showed higher levels of Clostridia sp and C irregularis as they got older, while those on a maize diet had more Lactobacillus species.