“The EU is Scotland’s biggest overseas regional food and drink export market, with exports worth £2bn in 2015,” he said.

“We simply can’t ignore the disastrous impact that leaving the single market, and the 500 million people within it, could have on our food and drink sector.”

We simply can’t ignore the disastrous impact that leaving the single market, and the 500 million people within it, could have on our food and drink sector Fergus Ewing, Scotland’s rural economy secretary

Mr Ewing was commenting as the country prepared to celebrate Burns Night on Wednesday (25 January) – a time for consuming traditional Scottish food.

In particular, he pointed to the value of Scotland’s potato sector, which could be hit if the UK has to pay tariffs to sell into the EU market.

“The value of Scotland’s potato sector is £167m, and we currently export Scottish potatoes to EU markets, tariff free, whilst relying on free movement of people for all stages of production and retail.

“A ‘hard Brexit’ would be devastating for Scottish agriculture and the many food companies which rely on Scottish produce. 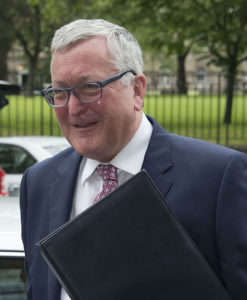 “Potentially, they face both high tariffs of up to 50% and loss of subsidy support.

“It may also put at risk Scottish protected food names which give confidence to consumers, and the common regulatory frameworks which help maintain food safety, animal and plant health standards and guarantee access to EU markets and many other countries.”

While she confirmed the UK would be outside the single market, she aims to retain as much free trade as possible with the EU, either by keeping some sectors within a customs union, or by negotiating a new free trade agreement.

But that is far from guaranteed and the National Sheep Association (NSA) has been one of many to express concern that tariffs may well be imposed on sheep exports.

“Tariffs placed on sheepmeat exports into the EU would dramatically reduce our competitiveness and the volumes sold there,” said NSA chief executive Phil Stocker.

Lords to examine the impact of Brexit

The House of Lords’ EU Energy and Environment Sub-Committee will hold a first evidence session on 25 January.

Peers will be taking evidence from key industry representatives, academic experts and government officials at hearings scheduled over the next three weeks.

The committee will seek to identify the key opportunities and challenges for UK agriculture and food arising from the decision to withdraw from the EU.

It will also be looking at the implications of Brexit on the supply of affordable and good-quality food in the UK and how future trading arrangements will affect domestic agricultural policy.

The first hearing will take evidence from Wyn Grant from Warwick University, the University of Reading’s Alan Swinbank and Allan Wilkinson, head of agrifoods at HSBC.