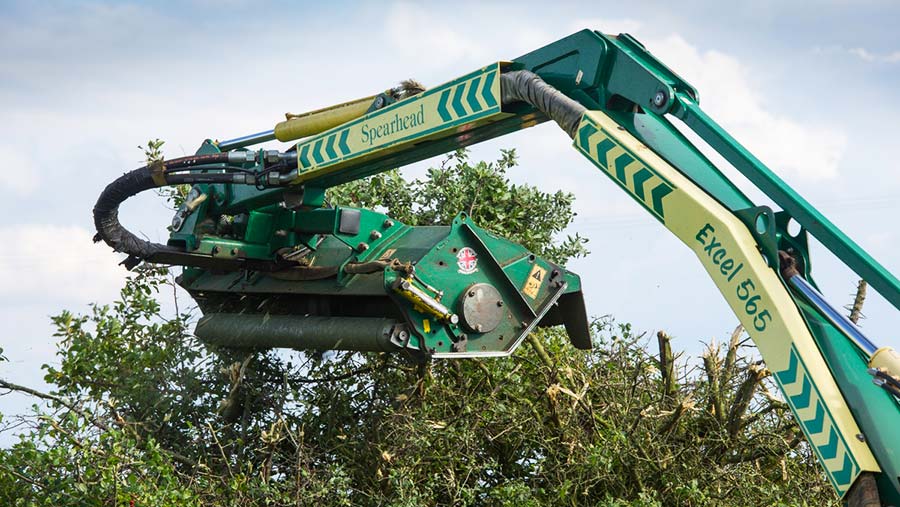 Defra’s decision to extend the hedgecutting ban to August was based on analysis of bird nesting records provided by volunteers to the British Ornithology Trust, Farmers Weekly can reveal.

Farm leaders and farm contractors have reacted angrily to Defra’s decision to extend the ban to cover the whole of August, questioning the “evidence” used to justify an extension to the non-cutting period.

Hedgecutting is now legally banned in the UK from 1 March to 31 August “to protect nesting birds on farms”.

A Defra spokesman told Farmers Weekly that the policy decision “is based on analysis of BTO nest records”, adding that there were no plans to alter its decision in 2016.

Farm leaders and farm contractors insist that extending the ban is unjustified because apart from wood pigeons, only a handful of species, such as the yellowhammer, are still nesting in August.

He said: “Our research suggested the only persistent nester in hedges into the late summer period was the wood pigeon and I would argue the more you disturb the wood pigeon the better.”

However, David Leech, a senior research ecologist at the BTO, explained the grounds for the evidence it submitted to Defra, which persuaded the department to extend the ban into August.

Dr Leech,who is head of its Nest Record Scheme, said the BTO’s nesting survey has been running since 1939.

But only data compiled from the last 10 years of surveys was submitted to Defra “to take into account the effects of climate change and get a measure of what is on the ground now”.

For the survey, about 700 BTO volunteers located across the UK are asked to go into the countryside to monitor more than 40,000 nests of over 150 species breeding across all habitats.

Farmland birds likely to be present well into August and beyond:

Farmland birds which tend to finish breeding at the end of July:

Dr Leech said: “In terms of the data we submitted to Defra, we look at the period that the eggs or chicks would be in the nest and we compare that with the data we had for the previous 10 years.”

As part of the survey, 50 farmland bird species are monitored, including red-listed species considered to be under threat, such as lapwing, turtle dove, linnet, cirl bunting and yellowhammer.

Dr Leech said the data showed a number of species breed “well into August”. He added: “The results show that for some species by the end of July there are very few active nests. Chaffinches are a great example.

“But for a lot of farmland bird species, such as buntings, bullfinch, linnet and yellowhammer, there are likely to be active nests with content through until the end of August.

“These are species of concern. They are farmland birds which have been declining over the last 50 years.”

He said the nest record data survey results showed regional variation due to different habitats and weather. But he insisted they were “quite conservative” because they do not take into account species that remain nearby in the weeks after they have left their nesting site.

Dr Leech explained: “When birds leave the nest the feathers are not fully grown and the flight muscles have not been properly exercised. They are very weak fliers.

“Most songbirds tend to sit by the nest in cover and they are still fed by the mother. After they have fled the nest, some species are still sitting there up to three weeks later begging for food. The birds can still be disturbed by hedgecutting during this period.”