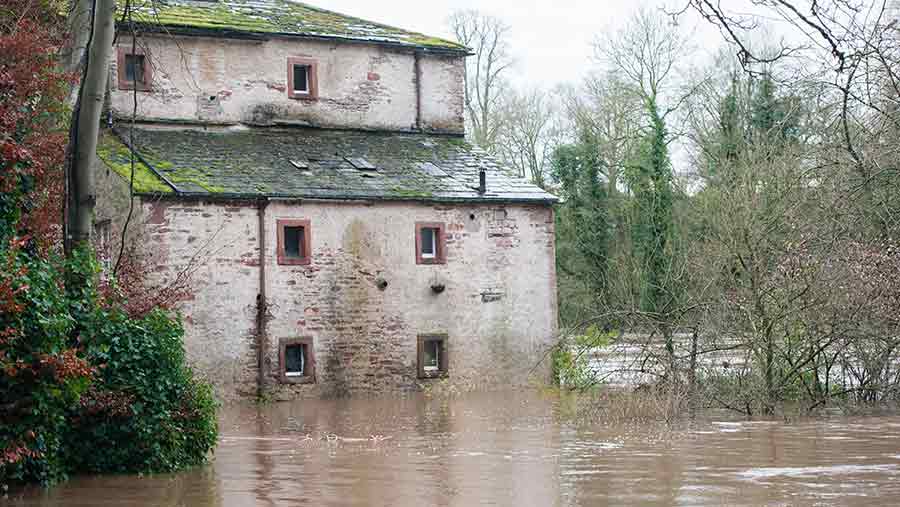 Flood-hit farms are expected to make insurance claims for more than £40m of damage, although with many of their losses uninsurable, the true cost of this winter’s storms on Britain’s farms will be much higher.

Rural insurer NFU Mutual, which insures 75% of UK farmers and thousands of rural homes and businesses, has issued the estimate for claims centred on northern England, Scotland and north Wales.

About two-thirds of the claims relate to farms and rural businesses and the remainder to damage to homes and cars.

Most claims relate to flooding damage to buildings and their contents.

Matthew Scott, chief claims manager at NFU Mutual, said: “Based on what we are hearing from our network of offices across the UK, the flooding in many parts of Scotland, northern England and north-west Wales could be the worst for several years.”

Meanwhile, NFU Scotland has called on the Scottish government and Scottish Environment Protection Agency (Sepa) to examine new measures to build resilience against extreme weather events into the sector.

NFU Scotland vice-president Andrew McCornick said: “For many farmers and crofters across Scotland, the weather in 2015 meant it was a year they would wish to forget. But 2016 has brought no end to the misery.

“The battering the country has taken in recent days, hit by storm after storm, has left thousands of acres under water, while those fields that have escaped the flooding are sodden.

“Valuable topsoil has been stripped from fields, debris dumped on land, fences, buildings and farm houses damaged and livestock lost. We are using our regional network to more accurately assess the scale of the damage, but in these difficult times, our members can be reassured that we are there to help and our regional managers, local offices and group secretaries will do what they can to assist.”

NFU Scotland has urged the Scottish government to consider making funds available to rebuild any damaged flood defences and help reinstate flooded land back into production, mirroring the Flooding Recovery Fund established by Defra in England and Wales.

“Longer term, ongoing political commitment to finding solutions will be needed if we are to not only recover from the immediate problems, but build long-term resilience into our farming systems to endure such weather events.”