Dozens of Irish farmers staged a demonstration outside the offices of the EU Commission in Dublin, claiming that plans being discussed as part of European trade talks will “sell out” the EU’s beef sector.

The protest was staged by the Irish Cattle and Sheep Farmers’ Association (ICSA) and was focused on the Mercosur deal being negotiated with South America and the Transatlantic Trade and Investment Partnership (TTIP) being hammered out with the US.

ICSA president Patrick Kent accused EU trade commissioner Cecilia Malmstrom of making reckless concessions and claimed the EU Commission has no democratic mandate to push for a trade deal at such a huge cost to the European beef sector. 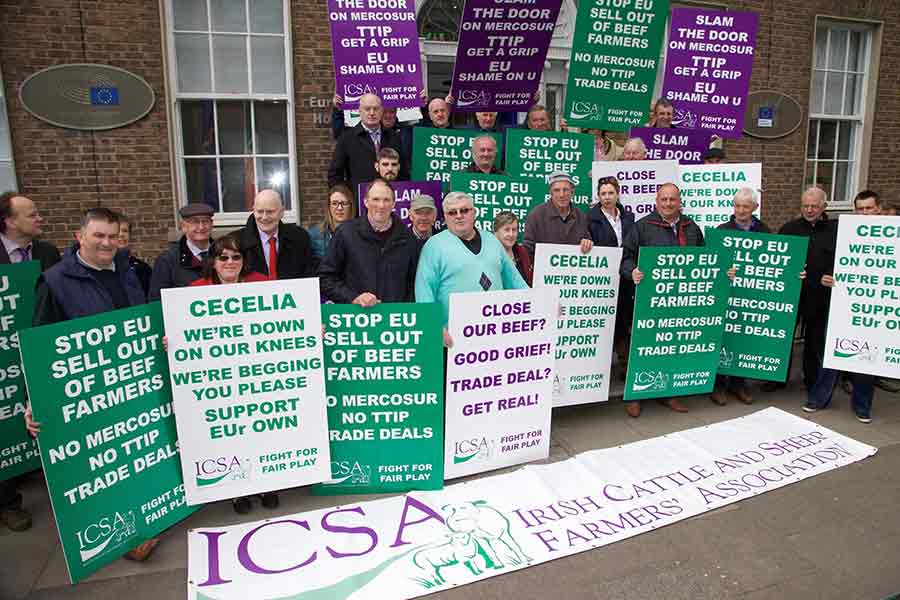 It was utterly unfair to provide free access to EU markets to external producers who did not have the same burden of cross-compliance and regulation endured by European farmers, Mr Kent said.

He added: “ICSA is particularly alarmed at the proposed concession of a 78,000t tariff rate quota [TRQ] in the Mercosur talks and the possibility of a similar offer on TTIP. All of this comes after the concession of 50,000t to Canadian farmers.

“It is not good enough to analyse these deals in isolation. The effect on EU beef farmers must be assessed on the basis of the aggregate importation of ultra-cheap beef from both North and South America.”

The protest, which took place on Wednesday (4 May), saw farmers carrying banners calling for Brussels to “slam the door on Mercosur” and “get a grip on TTIP”.

They also made a direct plea to the trade commissioner with the lyrical message:

“Cecilia. We’re down on our knees. We’re begging you please. Support EUr own.”

The demonstration came just a day after Copa-Cogeca, an EU farmers’ organisation, called on the EU Commission to exercise prudence in the talks, highlighting mounting evidence that any deals could have a devastating impact on beef farmers.

It pointed to a study carried out by the French Livestock Institute, which suggested that unless a cautious approach is taken to TTIP, specialised French beef producers could be looking at a 40-50% drop in income.

This would be very damaging, especially as they farmed in areas where there were no alternative form of employment, it said.