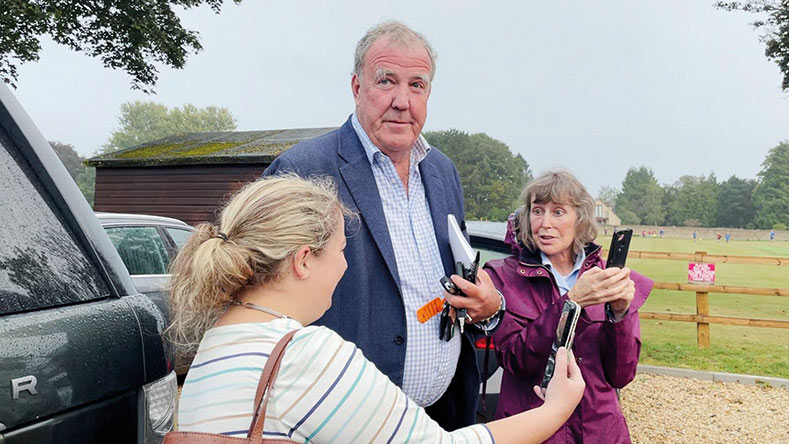 TV presenter turned farmer Jeremy Clarkson hosted a meeting for locals to address traffic chaos caused by people queuing to visit his farm shop – and outline his plans to build a new restaurant at the Cotswolds farm.

Mr Clarkson, 61, has faced criticism in recent weeks over traffic congestion in and around the village, caused by people queuing for up to two hours in cars to visit his Diddly Squat Farm Shop.

But speaking ahead of the meeting, attended by 80 locals, the Grand Tour presenter said he wanted to address concerns and explain his plans.

“I’m just here to listen, because, you know, gossip spreads in villages and they don’t know what we’re doing so I thought the best thing I can do is come down and say, ‘this is what we’re doing’,” he told ITV News.

Mr Clarkson added: “Somebody gave me the finger on the way in.”

Press were not invited to the meeting, but a local who did attend told Farmers Weekly that it was “really positive”.

The source said: “Mr Clarkson explained that he was giving up on the disused lambing shed and wants it to become some sort of eatery, such as a café/restaurant.

“Rural folk don’t like change, but I think that his promises to help the village with functions were very well received.

“I think he did a great thing by making an effort to hold the meeting, but he probably should have done it a bit earlier.

“He faced flak from some people, but Jeremy Clarkson is creating employment. He’s doing good things.”

Mr Clarkson told locals that he had created a temporary car park on the 404ha farm in Chipping Norton to alleviate the traffic congestion on roads in and out of the village.

“He has given up a wheat field for the parking and I don’t think people understand that,” added the source.

“I remember one weekend in June when there was traffic chaos, as people travel far and wide to visit the farm shop, which they have watched the Clarkson’s Farm series.

“It all got a bit acrimonious, but the locals know other ways around the site. People are not parking in the street anymore thanks to the wheat field that has been given up to accommodate cars.”

A spokesperson for Chadlington Parish Council declined to comment on the situation.

Farmers are being urged to check their field boundaries after two separate incidents of escaped livestock caused traffic chaos on motorways at the weekend.

On Saturday (11 September), traffic officers had to hold traffic between junctions 12 and 11 eastbound on the M62 near Salford for 40 minutes, causing a four-mile tailback after pigs escaped onto the road.

Highways England Northwest released a motorway camera still showing traffic officers in fluorescent bibs using brooms to try to usher the pigs off the road and back into the field.

⚠️ Animals in Road ⚠️#M62 westbound #J12 (#EcclesInterchange #M60 #M602) to #J11 (#WarringtonEast #Birchwood #A574) traffic has been temporarily stopped due to a number of pigs which are being a bit of a swine and won't move.

“Traffic has been temporarily stopped due to a number of pigs which are being a bit of a swine and won’t move,” tweeted the agency.

On Thursday (9 September), an escaped cow brought traffic to a standstill near Junction 6 on the anti-clockwise carriageway near Godstone on the M25.

Pictures taken on the motorway camera showed police trying to catch the beef cow, which was roaming across the lanes.

The cow was eventually captured and the incident caused traffic delays of around 60 minutes during the morning rush hour.

National Highways South-East saw the funny side of the incident on their Facebook page.

They reported: “Why did the cow cross the road? To get to the udder side! However, when that road is the M25, traffic officers need to turn their hands to cattle rustling to keep everyone, including the cow, safe.”