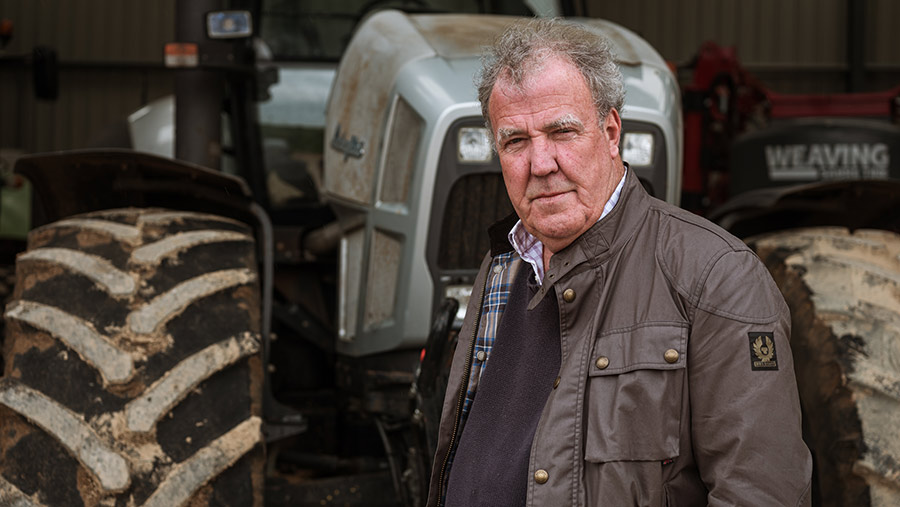 TV star Jeremy Clarkson has added his support to the NFU’s Back British Farming campaign, which is seeking a government pledge that Britain’s self-sufficiency will not slip below its current level of 60%.

The Oxfordshire farmer helped launch the union’s new report on food production on Wednesday (15 September), Back British Farming Day, when agriculture was also at the forefront of MP debates in Westminster.

“We were very nearly starved into submission in the Second World War because we weren’t self-sufficient,” said Mr Clarkson. “And during the first stages on the pandemic, everyone was asking ‘what happens if this gets really bad?’

The NFU has reiterated the importance of self-sufficiency, both to the farming sector and to the economy as a whole, ahead of the government’s first review of domestic food security, expected later this year.

“We are calling on you, as a champion of British farming, to make sure our self-sufficiency levels do not fall any further and every opportunity is seized to increase them,” says the letter.

“The best way to do this is by setting a target for Britain’s food production levels, using self-sufficiency as a key metric.”

In a new development, however, Defra has announced plans to help UK farmers and food and drink businesses boost exports.

“The UK agri-food sector contributes about £20bn in exports each year, yet only 20% of companies sell their goods overseas,” it said in a statement. “The exports initiative announced today will help farmers access the UK’s considerable export potential.”

The exports initiative will launch later in the year.

Farm leaders from NFU Scotland (NFUS) are also in London as part of Back British Farming Day – the first time they have been to Westminster since before the Covid pandemic started 18 months ago.

NFUS president Martin Kennedy, director of policy Jonnie Hall, and political affairs manager Beatrice Morrice will warn MPs that the current labour crisis is undermining all parts of the food and drink supply chain, leading to significant losses on some Scottish farms and a growing number of empty shop shelves.

NFU Scotland says it wants the government to address the shortfall in both seasonal and permanent staff.

It is also sharing concerns about the impact of an impending free-trade agreement between the UK and New Zealand.

Mr Kennedy said: “It is galling to hear that the UK government is on the verge of signing up to another free-trade deal that will permit a growing level of imports while delivering very little to our food and drink sector in return.

“Granting unfettered access to our markets to a major sheep and dairy producing nation like New Zealand comes on the back of a similar damaging deal being signed with Australia in June.”