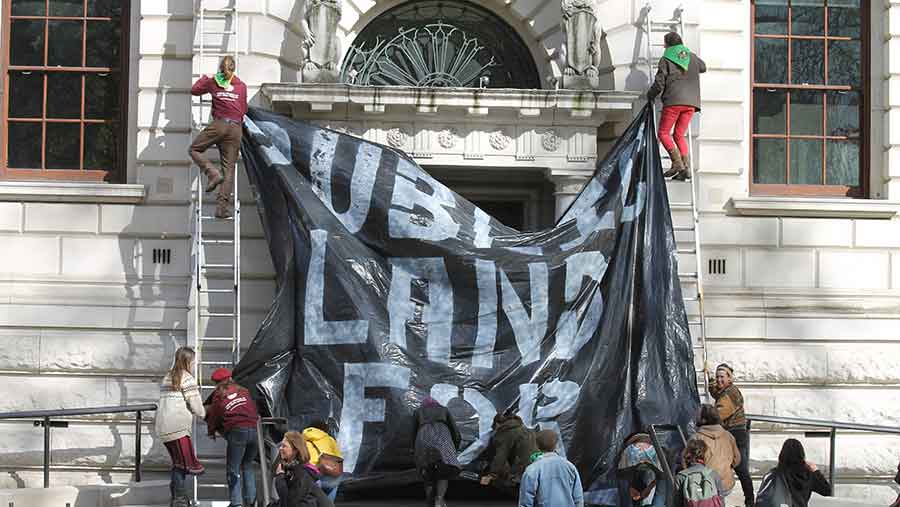 Disgruntled land workers have taken their campaign against county council farm sell-offs to the heart of government, unfurling a seven-metre-high poster across the entrance to the Treasury.

A group of protesters from the Landworkers’ Alliance (LWA) assembled outside the building off Parliament Square on Sunday (17 April) and scaled the portal on ladders. They then draped their banner declaring “Public Land for Public Good” over the front door of one of London’s most iconic buildings.

But austerity cuts from central government had pressured local authorities to sell off their farms to plug other holes in their budgets, accelerating privatisation and closing off this key route into farming for young people.

According to the LWA, some 3,850ha of publicly owned farmland and 219 working farms have been sold by local councils since 2010 – an exercise that has turned “public resources for the many into private wealth for the few”.

County council farm rents had also climbed by 30% since 2010, Mr Paynes told Farmers Weekly, as local authorities sought to extract more profit from their land assets. Yet investment back into the estates had dropped 4% over the same period. 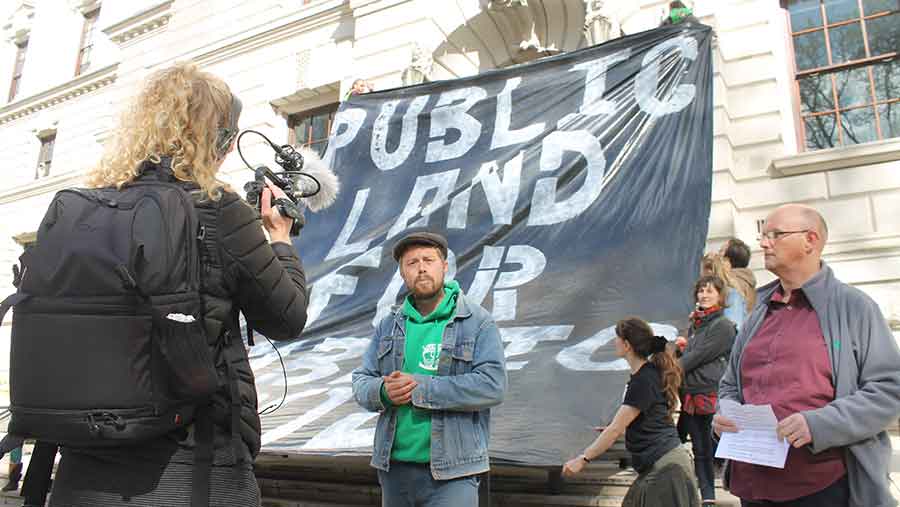 He explained that county council smallholdings date back to the late 1800s, when they were set up as a way of bringing fresh blood into the farming industry.

Their role changed after the First World War, as a means of settling ex-servicemen into homes and employment, before returning to their original function with the 1970 Agriculture Act.

“But over the past 30 years, the number of county council tenants has at least halved, and more than one-third of the acreage has been lost,” said Mr Dunn. “We now have just over 60,000ha of land and 1,500 tenants – and this is falling.”

Indeed, since the recession of 2008 and the subsequent period of austerity, the rate of loss had accelerated, Mr Dunn told Farmers Weekly.

As well as losing routes into agriculture, the sell-off did not represent best value for taxpayers, he added. Run properly, local authority estates could generate significant, ongoing revenue for frontline services.

“Selling income earning assets is a short-term fix to a long-term problem. Bad financial management should not be allowed to destroy what remains of our county council farms.”

Mr Dunn suggested there was a role for Defra to take a greater interest and ensure local authority estates were better run.  “The treasury should also require local authorities to demonstrate best value for local people, rather than fostering a ‘dash-for-cash’ policy.”

The LWA protest  formed part of an “international day of struggle” organised by small producers’ organisation La Via Campesina, which co-ordinated action across more than 70 countries, highlighting threats to the livelihoods of 200 million family farmers worldwide.