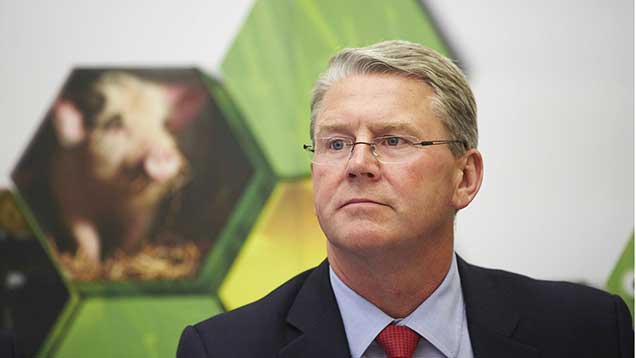 Farm levy board chairman Peter Kendall has set out his vision to rebrand the Agricultural and Horticultural Development Board as a world-class centre of agricultural excellence.

Talks about the AHDB’s future activities and its potential role will start as early as next April. It follows the imminent appointment of a new chief executive and the organisation’s move this autumn into a single building at Stoneleigh Park, Warwickshire.

Speaking at the AIC Agribusiness 2015 event, AHDB chairman Peter Kendall said the next stage on the journey to becoming one organisation was to have a “genuine industry debate” about the kinds of activity that the levy body should be focusing on.

The AHDB is the umbrella organisation for six sector bodies covering all the main farming sectors and horticulture, although not the poultry sector. It has an annual budget of about £60m and represents 75% of all UK farm output.

“The bottom line is we’ve got to look, feel and behave like one organisation if we’re going to deliver as the UK’s centre of excellence for agriculture,” Mr Kendall told delegates at the Peterborough Arena on Wednesday (12 November).

“Working together in one building, focused on delivering under one unified, and unifying, brand means we will be able to leverage the impressive AHDB cross sector work that is being rolled out in areas such as soils, pest research, market intelligence, red meat exports and education.”

Mr Kendall acknowledged that talk about long term ambition and farmers’ potential to seize opportunities did not sit comfortably with sectors in the grip of low prices – including cereals and dairy. But it was important that agriculture competed for a better share of the market.

“The truth is, global market volatility is here to stay in the same way as the vagaries of the weather are. But we’ve got to keep looking at the bigger, long term picture – at the opportunities provided by growing markets at home and overseas.”

The key to success in a volatile market lay in collaborative supply chain working, said Mr Kendall. This included a focus on growth and exports, good links between education, research and knowledge exchange and strong, large scale centres of excellence for agriculture.

Mr Kendall added: “We want to provide levy payers with the right tools to become the most efficient and sustainable businesses they can be. Let’s aim to be the envy of other countries and not be satisfied with sitting back and letting them take the lead.”

Becoming a world-leading centre of excellence for UK agriculture would build on the AHDB’s reputation as an evidence-based organisation with a solid track record of commissioning and delivering research, knowledge transfer and independent market information.