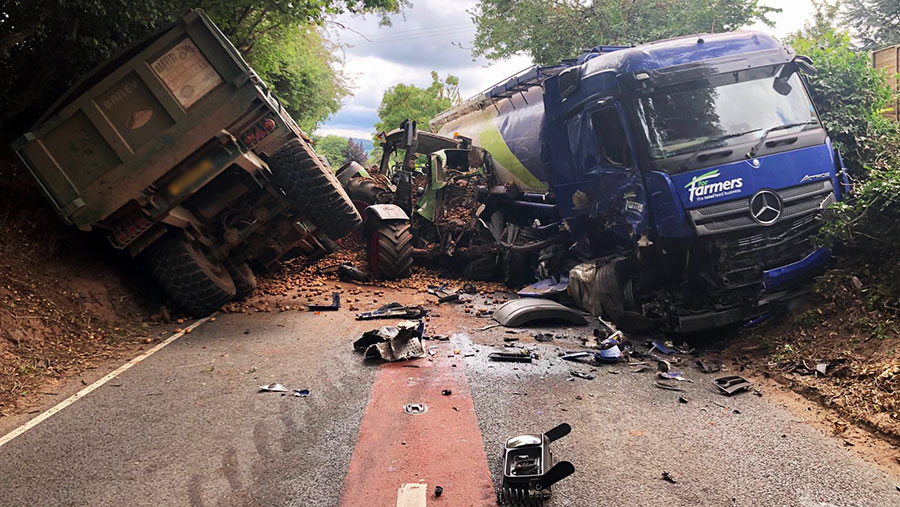 This dramatic photo shows the mangled wreckage of a serious crash between a tractor-trailer and lorry on a rural road in Herefordshire.

Emergency services were called to the scene on the A449 at Gatsford, Ross-on-Wye, on Saturday afternoon (1 August).

The collision involved a light goods tanker transporting farm feed and a tractor-trailer loaded with potatoes.

Paramedics treated both drivers of the vehicles at the scene and despite locals describing them as “walking wounded”, they escaped with just minor injuries.

The road was closed in both directions for more than two-and-a-half hours, and diversions were put in place to allow for the recovery of the vehicles.

Fire crews from Ross and Whitchurch used environmental grab packs and soil to prevent about 100 litres of hydraulic oil and 200 litres of red diesel from entering watercourses.

A spokesperson for West Mercia Police said: “We were called shortly after 1.20pm on 1 August to reports of a collision involving a tanker and a tractor.

“The tractor had been pulling a trailer of potatoes and had overturned and the tanker was leaking fuel. The road was closed while it was cleared and the vehicles recovered.

“Thankfully, no one was seriously injured in the collision. Anyone who witnessed the collision but hasn’t yet spoken to officers can provide information via our website or by calling 101.”

A spokesperson for West Midlands Ambulance Service said: “We treated two patients, the drivers of the vehicles for minor injuries and both were discharged at the scene.”

Local news group Ross-on-line received more than 1,400 comments and 3,600 shares after it posted the picture on its Facebook page @rossonlinenews.

Elsewhere, a woman has died following a crash involving a red Kawasaki motorbike and a tractor on the A141 in Wimblington, Cambridgeshire, on Sunday (2 August).

The driver of the motorcycle, a man in his 50s, was treated in hospital for serious injuries. But the pillion passenger, a woman in her 50s, died at the scene.

The driver of the tractor, a woman, was not injured. Cambridgeshire Police has appealed for any witnesses to call 101.

On Monday (3 August) in Cornwall, the A392 at Quintrell Downs – the main road between Newquay – was closed for several hours after a tractor crashed and overturned. There were no reports of serious injuries.