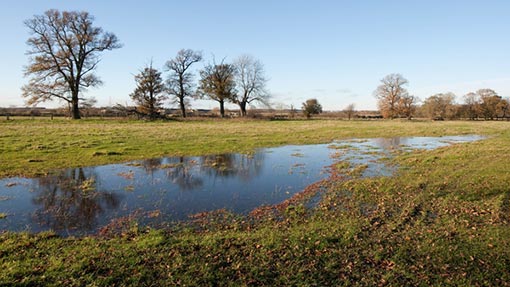 The Met Office is warning farmers they could see a repeat of last year’s devastating winter floods this year.

The forecaster has published its three-month outlook for October to December, which warns of an increased risk of unsettled, mild and wet weather.

The prospect of another wet winter will be unnerving for many farmers, especially those on the Somerset Levels or along the Thames whose businesses are still recovering from last winter’s record-breaking floods.

As farmers were bracing themselves for a wet week, with heavy rain and gale-force winds forecast, following the driest September on record, the Met Office said “wetter-than-normal” conditions were likely over the next three months.

“Our latest three-month outlook suggests an increased risk of milder and wetter than average conditions for the period Oct-Nov-Dec based on our seasonal forecasts and those from other leading centres around the world,” it said.

The Met Office said there was a 25-30% probability that the UK would see “well-above-average” rainfall this winter of 430mm or more .

But there was only a 15% chance the country would experience a drier than normal winter, with under 305mm of rainfall.

However, the Met Office said there were still “substantial probabilities” that average or opposite conditions, such as cool, dry weather, may occur.

“This is because there are many competing factors that determine what our weather will be like in the coming months,” it explained.

“The outlook also highlights an increased risk of unsettled weather relative to what is usual for the time of year, but – again – there are still reasonable chances of other scenarios.”

The Met Office likened predicting the long-term forecast to picking the winner of a horse race, which sometimes did not go to form.

“It’s a bit like the science equivalent of factoring the odds on a horse race and like any horse race, it’s always possible the favourite won’t win,” it added.