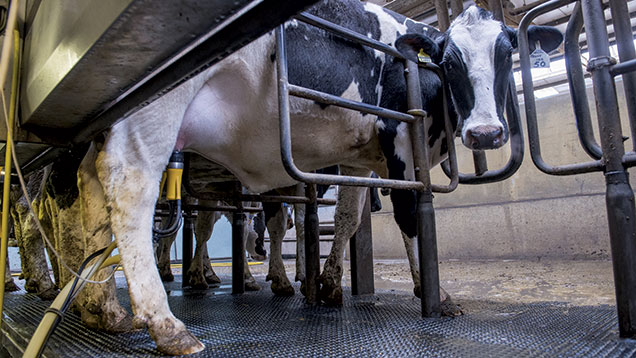 Speaking at AgriScot winter agricultural show at Ingliston, near Edinburgh, on Wednesday (17 November), NFU Scotland’s dairy committee chairman Gary Mitchell called for stabilising measures for the dairy market, which has been hammered by the worldwide crash in commodity values and the unforeseen impact of the Russian food ban.

But above all Mr Mitchell made a rousing emotional appeal to dairy farmers to believe in themselves and not seek someone else to blame for the volatility of the marketplace.

He said the cyclical nature of the industry was here to stay and farmers must learn to deal with it.

“There is potential for Scotland’s dairy supply chain to grow but firstly we need much more milk going into higher value markets along with increased processing capacity in Scotland to minimise the need for milk crossing the border,” he added.

“The breakdown in the balancing contract between First Milk and Muller Wiseman has exacerbated the problem and underlined the need for this to be addressed.”

Mr Mitchell attended a milk crisis meeting of European dairy farmers in Brussels this week and described the meeting as “like being at a wake without a corpse”.

He said all nations were struggling with the level of volatility in the dairy sector.

“There was widespread support for more robust market intervention measures to be introduced. However, Scottish and UK dairy farmers must also be proactive in improving our lot,” he added.

“Around 90% of dairy farmers enthuse me but to those who are toiling, my advice is that they should ask themselves if the industry is for them.”

Meanwhile Paul Grant, the chairman of the Scottish Dairy Growth Board (SDGB) – the man charged with finding solutions to the Scottish dairy industry’s problems – assured producers that “some processor” was going to make a major investment in Scotland.

“I can’t say when it’s going to happen, but we’re working on an opportunity in the medium to long term and hope to bring the good news to you that someone is going to make investment,” he said.

Mr Grant added that the SDGB was also working with processing companies to establish a Scottish dairy brand export to catering outlets across the world.

He said: “We’ve done a great job with Scottish salmon, getting it to hotels and catering outlets worldwide and on the plate within 24 hours. We can do the same with cheese.”

Milk officials from the NFUs of Scotland, England, Wales and Northern Ireland will meet in Edinburgh in December to attempt to find common actions and clarify what can be achieved at EU and commission level.

They will also investigate UK policy areas that could be tackled by the UK’s unions collaboratively.

Mr Lochhead said Dairy Hub was a way for farmers to get advice on ways of managing finances and improving efficiency.

He also pledged £25,000 for the Dairy Growth Board towards the development of a Scottish dairy brand.