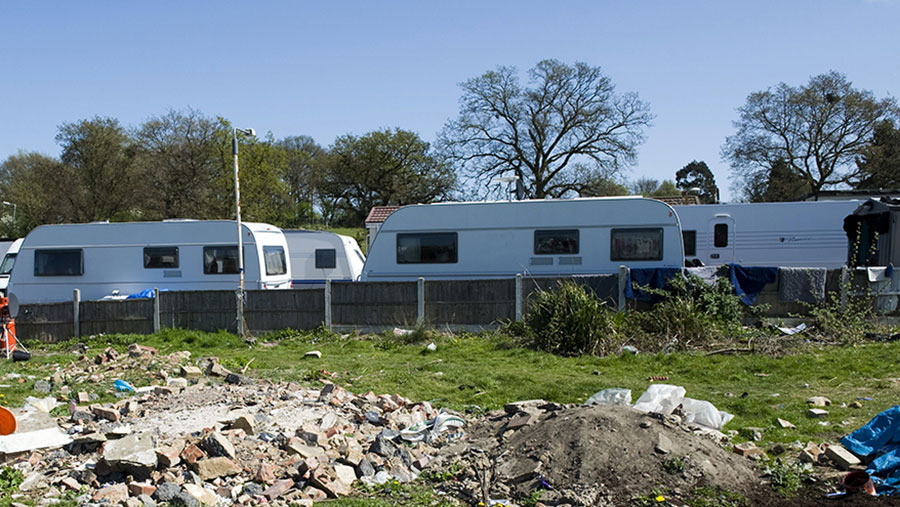 Ministers are looking at toughening up the law to enable landowners to evict unauthorised travellers from their land more quickly.

The government has launched a consultation seeking views on what more can be done to ensure local authorities, the police and landowners can deal with unauthorised sites and developments efficiently.

Government statistics suggest the number of traveller caravans on unauthorised sites has risen by nearly a third over the past seven years – from 14,498 in July 2010 to 19,071 in July 2017.

Ministers want to gather more evidence to understand the scale of the issue and the costs landowners incur to evict trespassers and repair damage done to sites.

They are also looking into how court processes might be modified to make it more straightforward to evict illegal travellers.

Another option is the introduction of a criminal offence to as a deterrent.

Travellers who trespass on land and intimidate the landowner may currently be charged with aggregated trespass.

But the government is asking whether it should further criminalises actions in relation to unauthorised encampments that substantially damage land or cause serious inconvenience to the landowner or other lawful users of the land.

“But, we are particularly concerned about illegal traveller encampments, and some of the antisocial behaviour they can give rise to.

“We must promote a tolerant society and make sure there are legal sites available for travellers, but equally the rule of law must be applied to everyone.”

Christopher Price, CLA director of policy and advice said the association would respond to the consultation making it clear the detrimental impact that illegal encampments had on landowners and local communities.

“Travellers who occupy land illegally should not be given significant protections which prevent their lawful removal,” he said.

“Existing powers of enforcement could be used much more effectively on private land if the local authority, police and other relevant agencies had a more co-ordinated approach and used their joint resources at an earlier stage in the development of an illegal camp.

“To really tackle illegal sites, the government must ensure there is suitable provision of lawful camps to avoid the issues that arise from unauthorised encampments,” he added.