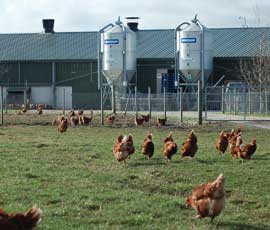 Effective monitoring of gut health in broilers requires a varied approach to address the spectrum of conditions they may suffer from.

Speaking at the recent Society of Feed Technologists conference in Coventry, Prof Richard Ducatelle from the University of Ghent in Belgium explained that wetness in litter is usually closely associated with a breakdown in the normal function of the gut. But this can be controlled through careful control of a variety of diseases.

Producers were advised to rotate treatments through various anti-coccidial drugs, to conduct autopsies on birds at 28 days old and to score intestinal lesions. With discussions ongoing about a possible ban on anti-coccidiostats in feed, Prof Ducatelle said pharmaceutical companies were not investing in developing replacement drugs, which could lead to a build-up of resistance.

Charicterised by sudden death in broilers, but not associated with diarrhoea or wet litter, monitoring can only be done by autopsy. Susceptible birds may have coccidiosis infection, a high protein diet or high stocking density.

These micro-organisms are not pathogens in the broiler’s intestinal tract and, whether they carry them or not, they perform equally, said Prof Ducatelle. Good biosecurity is essential to preventing outbreaks. For campylobacter, there is no reliable on-farm test.

This is a term usually used to explain a situation where the litter is wet and the flock is performing poorly, but with no obvious signs of disease. Acute forms result in mortality, with birds demonstrating necrosis of the intestinal wall.