“Sudden” death in the grower pig is a not uncommon finding in the modern pig herd.  One of the most common causes of such losses is rotation of the intestine within the abdomen about all or part of its attachment to the body underneath the spinal column.

Such a twist will cut off the blood supply to the gut, causing gangrene and rapid death.  The condition may be seen sporadically or in outbreaks.

In most cases pigs will be found dead.  It can occur at any age, although most commonly in the grower stage between 25 and 100kg, The typical case will have a grossly swollen abdomen often with the rectum protruding and will rapidly discolour and decompose.  The whole carcass will be pale.

At post mortem examination, the loops of gut will be distended with gas, have a deep purple colour and be filled with heavily blood stained liquid. 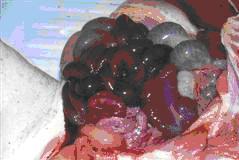 The wall of the gut is thin, differentiating it from acute PIA/PHE.  There is usually an accumulation of bloody fluid free in the abdomen.

Depending on how much of the gut has twisted, a palpable knot can be found in the suspensory tissues that normally hold the gut.

Twists involving the whole of the intestine can be fully 360°, although usually are less and, as such, the most obvious part of the gut – the caecum – will not be pointing towards the pelvis and anus which is its normal orientation. 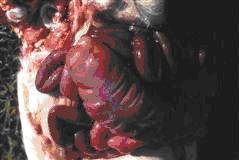 Just occasionally pigs may be noticed prior to death, during which time they will be pale, depressed, inactive and, if very early, showing signs of severe pain.  Once the gut has died inside the pain passes and death is peaceful.

The pig is particularly susceptible to torsion of the gut and, as such, can be viewed as a “design fault”.

The whole of the gut is attached to the body by a suspensory mechanism called the mesentery, which connects the 20m or so of gut loops to the underside of the spinal column within the abdomen over a length of a few centimetres.

It is, thus, fundamentally unstable.  The prelude to a twist is likely to be excessive filling of all or part of the gut with gas, increasing the instability of the gut as it hangs down in the abdomen.

Sudden movements then allow the gut loops to rotate and cause a constrictive twist.  Therefore, the basic causes of twisted guts are conditions which encourage gas development in gut.  These can be listed as:-

1) Overeating.
2) Winter feeding of fermentable wet feed e.g. whey – in summer the higher storage temperatures allows some fermentation before feeding reducing gas production in the gut.  This process is reversed in winter.
3) Erratic feeding, especially but not exclusively on wet feed.  Where feed supply is interrupted e.g. at weekends, following pipe breakdowns or freezing up, a surge of twisted guts will occur once supply is restored.
4) High density diets and diets including very high levels of specific raw materials e.g. soya.
5) Colitis.  Where this condition exists, the proliferation of bacteria in the hind gut tends to create more feed fermentation and gas production and precipitates twists. As a general rule twisted guts (torsion or volvulus as it is otherwise known) are more common where there is any evidence of scour in the growing pig.

Control of twisted guts will obviously centre around control of feed intake, dietary manipulation and control of enteric disease.

However, given that the condition is most common in populations where feed intake and growth are high, twisted guts can be regarded as very much a production disease and perversely is often a sign that pigs are doing well.

It will therefore require careful evaluation of the cost of deaths measured against the potential loss of growth if feed levels or nutrient density are reduced.