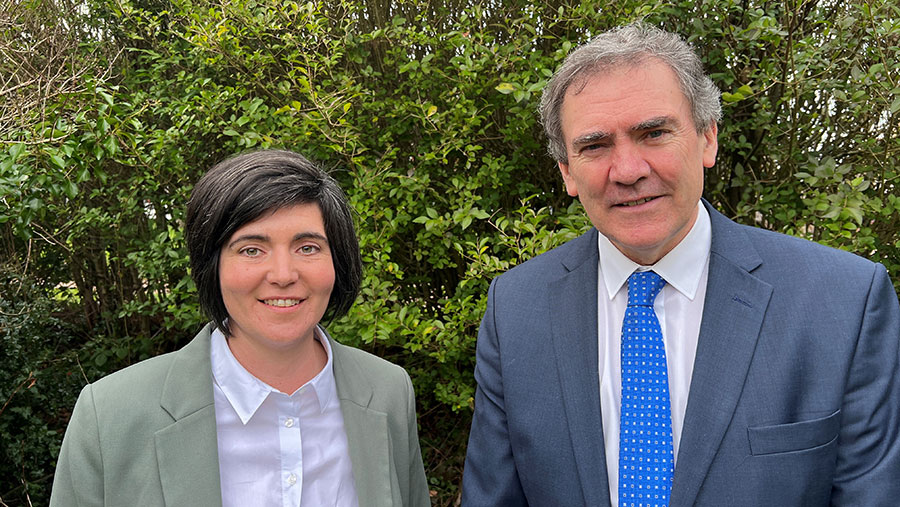 NFU Cymru elected a new president and deputy president, who will be tasked with fighting for the Welsh farming industry at one of the most challenging periods in its history.

Aled Jones, an eighth-generation dairy farmer who runs a pedigree herd of Holsteins with his son, Osian, near Caernarfon, north Wales, was unanimously elected as president.

The pair were elected at a meeting of NFU Cymru’s Welsh Council in Llandrindod Wells, Powys, on Wednesday 9 February.

Mr Jones is married to Eilir and together they have four children, Osian, Prysor, Erwaun and Gruffudd, and four grandchildren.

He previously held a variety of positions across the industry, including the post of chairman of milk recording company Cattle Information Services (CIS) for seven years, and as a trustee of Holstein UK for eight years.

“There’s never been a more important time to represent farmers in Wales, given that we’re still establishing new markets outside of the EU and that the agricultural sector here in Wales will soon have its own specific Welsh policy,” said Mr Jones.

“I’d like to see us further increase membership of NFU Cymru. I’d like farmers who are not represented by a union to see the value of joining and the strength in numbers it gives us to stand up for Welsh agriculture.”

Mr Jones stressed that farmers’ fundamental role was to produce food, at the same time as being custodians of the landscape and the environment.

He said Covid-19 has highlighted how fragile our food production systems are, and with a global spike in energy prices and food prices predicted to rise, the industry must deliver a “healthy, safe, sustainable and affordable product” for people of all price points.

Ms Reader, a third-generation mixed farmer, farms in partnership with her parents and uncle at Goldsland Farm, Wenvoe, near Cardiff, which is home to 200 milking cows, 150 sheep, 90 beef cattle and 48ha of arable.

She is a co-founder of Cows on Tour, an Open Farm Sunday host and a former NFU Cymru Wales Woman Farmer of the Year.

“I’m honoured to have been voted into this important role by my farming peers,” she said. “During my term in office, my priority is to ensure the union effectively engages with the next generation of young farmers and that we work together to deliver a prosperous future for the tomorrow’s Welsh farmers.”

Both Mr Jones and Ms Reader paid tribute to outgoing NFU Cymru president John Davies for his dedication to the union and for fighting the cause of Wales’ farmers so successfully over the course of his four-year term as president.

Congratulations to the new NFU Cymru President @AledNfu & Deputy President @AbiReader who were elected today at a meeting of our Welsh Council.

Huge thank you to our outgoing president @Johnpentre for his work and dedication during his term in office.