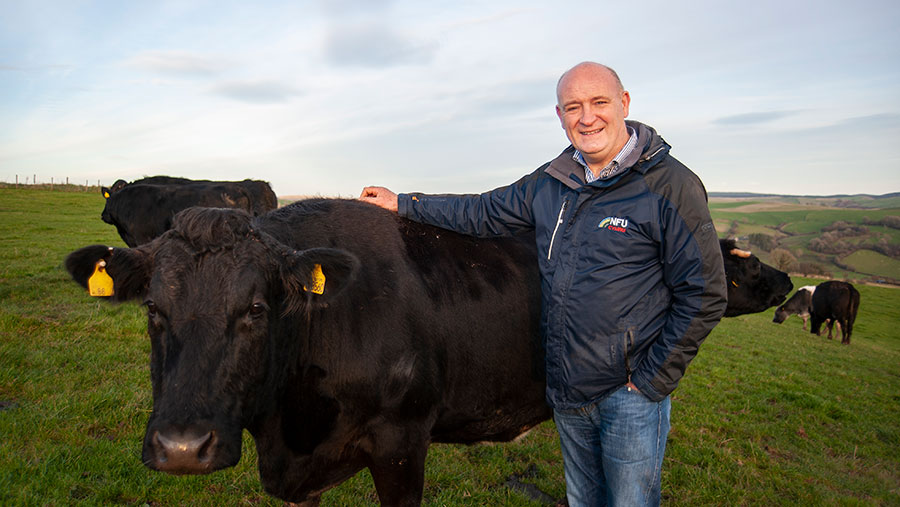 NFU Cymru president John Davies is bidding to cross the border and become deputy president of the NFU in England.

Mr Davies, a beef and sheep farmer from Powys, will be battling it out for deputy president against the current NFU vice-president Tom Bradshaw in next month’s NFU officeholder elections.

Wiltshire farmer Minette Batters is set to be elected unopposed for a third term as president after four successful years.

In an interview with Farmers Weekly, Mr Davies set out his ambitions for the deputy role.

He said: “I’ve been part of the NFU team for the past eight years. We’ve seen Brexit and we now need to create a policy which gives opportunities for young people and family farms and strikes the right balance between nature and productivity.

“There is work to do on this – not just at Defra – but across the devolved nations. I know all of the key players and we need to put structure in place.

“I think climate change is a big opportunity as well as a challenge [for farming]. We have a fantastic place to grow food, but Defra does not have the monopoly of good ideas. We need to pick them up from everywhere and ensure that policy is right going forward.

“ELMs [the Environmental Land Management scheme] isn’t what is needed in terms of the budget splits. We need to have a sustainable farming platform provided by an index across the UK – a list of options which each country can use.”

If elected, Mr Davies said he would not quit the family farm and community which remains “very important” to him.

“Hybrid working has come in a lot in the past two years since Covid,” he said. “But I would have to travel – whether it’s in Devon or Carlisle, you have got to be there.”

Roberts to stand down

Farmers Weekly exclusively revealed in October that NFU England deputy president, Hertfordshire farmer Stuart Roberts, had decided not to stand for re-election after four years as a union officeholder.

Mr Roberts said he was proud of his achievements at the NFU but wished he could have done more to tackle farming’s poor record on health and safety.

An NFU spokesman said nominations for the three positions had now closed.

Officeholder elections are voted on by the NFU’s “electoral college”, which consists of county chairmen and women, council delegates and the Welsh representatives. Votes are weighted according to the latest membership income by county.

Candidates require a simple majority of more than 50% to be elected. However, according to the NFU constitution, after two terms in post Mrs Batters requires 75% of the vote to be re-elected president.

The officeholder elections will decide the three positions of NFU president, deputy president and vice-president for the next two years and will take place after the NFU’s annual general meeting on 23 February.

This is scheduled to take place at the NFU conference at the ICC in Birmingham, subject to covid restrictions.

In Wales, Aled Jones, a dairy farmer from Mid Gwynedd and current NFU Cymru deputy president, will be unopposed for the position of president in the union’s upcoming elections, which are expected to take place in the second week of February.

All three candidates took part in two virtual hustings events last week and videos have been published on YouTube outlining their ambitions.

NFU Scotland held its bi-annual officeholder elections in February 2021. Martin Kennedy was elected president and Andrew Connon and Robin Traquair were elected as the two vice-presidents.

Next year, all three posts will be open for nominations at the union’s annual meeting.