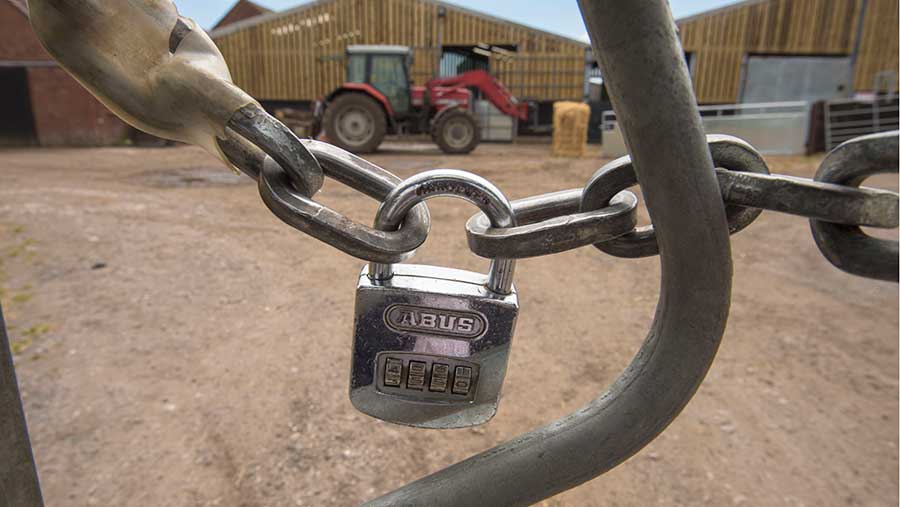 The NFU has called for “prompt, effective action” to deal with rural crime, after new Home Office figures show agricultural-related incidents are on the rise.

The figures in the 2017 Commercial Victimisation Survey, released on 3 May, are used to demonstrate to police and government the true extent of crime, with up-to-date statistics.

About 1,400 businesses were affected by robbery in 2017, while vandalism accounted for one-third of all crimes (37,000) and had the highest repeat victimisation rate at five incidents per premises.

The report states vehicle-related theft, robbery and fraud instances have increased since 2013, while burglary, vandalism, assaults and threats, and all thefts have decreased.

The most common type of agriculture-related antisocial behaviour (ASB) was trespassing or unauthorised access of land or buildings, with just over one-third (35%) of premises having experienced this in 2017.

Prevalence rates across all types of ASB (including lamping, livestock worrying and using land for grazing animals without permission) have increased since 2013, but the report says none of the changes are “statistically significant”.

NFU deputy president Guy Smith said tackling rural crime has no simple fix and needs commitment and resources from both the police and government.

“These crimes have more in common with organised crime than simply spontaneous acts, and it all affects the daily lives of farmers in far-reaching and costly ways,” Mr Smith said.

“It is time that we saw some considerable action being taken by the government and police to curb increasing crime in the countryside, and allow farmers to do what they do best – producing food for the nation.”

A scheme has been launched by Warwickshire Police to protect against thefts of agricultural vehicles.

“Police – stop, if moving between 10pm and 5am” stickers are available for farmers and agricultural businesses to apply to their vehicles.

If seen on the roads during these hours, police patrols not already engaged on calls will seek to check that they are being used by their rightful owner. 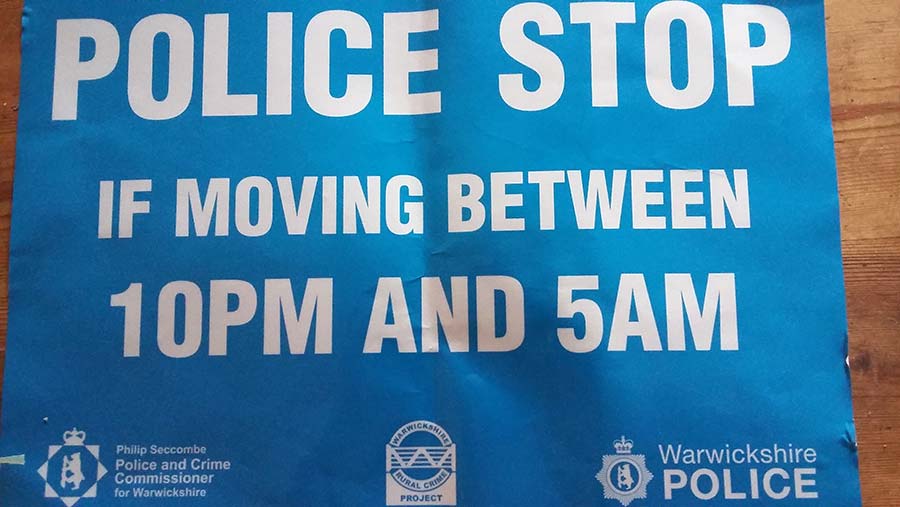 Developed in conjunction with Leicestershire Police, the new initiative is being run through the Rural Crime Project, which is funded by Warwickshire police and crime commissioner Philip Seccombe.

“Similar schemes have proved very successful in reducing the number of attacks against ‘cash-in-transit’ vans and we think it can have the same effect on rural crime,” Mr Seccombe said.

“We want to reassure rural communities and also provide the deterrence message that Warwickshire is not a soft touch for rural crimes.”

Anyone who wants to obtain “Police – stop” stickers should contact Carol Cotterill, rural crime co-ordinator for North Warwickshire, by emailing carol.cotterill@warwickshire.pnn.police.uk or by calling 07787 151 848.