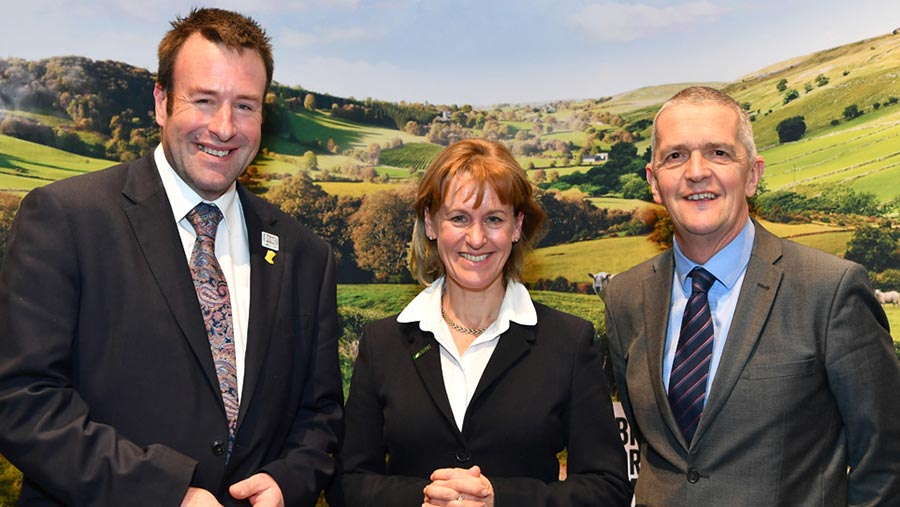 Ms Batters was elected at a meeting of the union’s ruling council following the NFU’s annual conference in Birmingham on Wednesday (21 February).

She succeeds Meurig Raymond and will serve a two-year term as president.

Ms Batters said: “I am grateful to all the members who have given me the opportunity to lead our industry through Brexit and beyond.”

She added: “At the heart of the NFU is its members and I would like the organisation to aim even higher on their behalf.

“British farming is in the spotlight like never before and this is a great opportunity to reposition the sector in the eyes of the nation.

“Together, as a new officeholder team, we will hit the ground running and I look forward to sharing our new vision for farming at the earliest opportunity.”

Mr Smith pledged to challenge Defra secretary Michael Gove over his Brexit vision for agriculture – and insists farm support must not be redistributed out of the sector.

Mr Gove’s focus on securing a “green Brexit” was in danger of marginalising growers and livestock producers, said Mr Smith, who previously served four years as the union’s vice-president.

“It seems like he wants the whole of his policy delivered through the environment – and we worry about where that might leave food production,” he added.

Mr Roberts, who was elected NFU vice-president, echoed Ms Batter’s view that the union must communicate its own clear vision for agriculture.

This vision must be relevant to the wider non-farming public as well as its own members, said Mr Roberts, a beef and arable producer who also has farming interests in Kent.

“We need to look at ourselves as an industry and embrace the new world that we are all entering.”

The NFU needed to be bold – going to the government with proposals and answers as ministers sought to devise a post-Brexit agricultural policy for the UK.

“Let’s work out where we need to change, but let’s never forget producing food for society is a good thing,” said Mr Roberts.

It was important too that the NFU worked with other interest groups, not in isolation.

“That means working across the piece, making alliances, and not being precious about who we sit around a table with.”