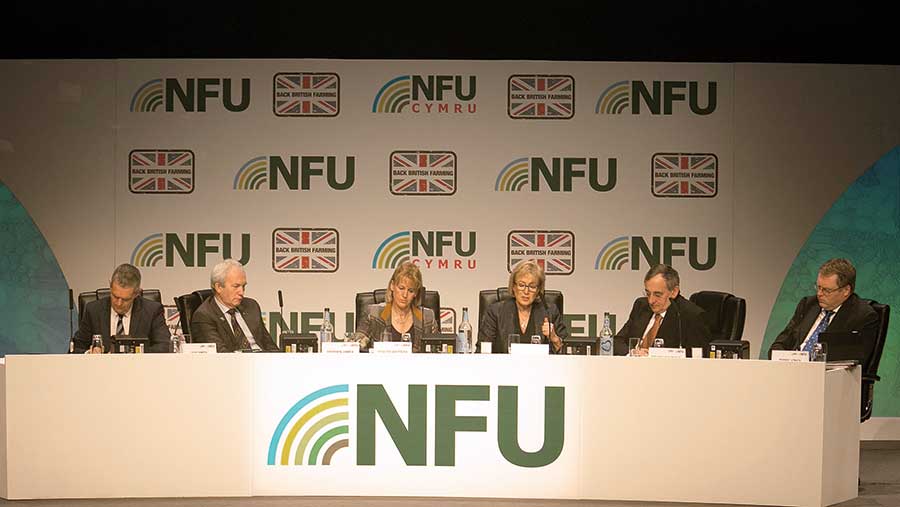 First details have emerged of NFU proposals for a three-pronged approach to a British agricultural policy after the UK leaves the European Union.

The support would fall under three broad categories, according to plans being worked up by the union.

Details of the fledgling policy – which will be presented to the government once fully developed – emerged at the NFU’s annual conference, held this week in Birmingham.

The first area would be designed to enhance the productivity and competitiveness of farm businesses. This could include capital grants to farmers, training and advice, knowledge transfer and tax breaks to encourage investment.

See also: Farmers give thumbs up to sector’s future

The second area would reward farmers who undertake environmental measures.

Much as now, it could include government-funded agri-environment schemes.

But it could also incorporate private funding, such as water companies paying farmers to look after watercourses.

The third area would mitigate against the effects of volatility on farm incomes.

This could include crop insurance, futures contracts and income guarantees, as well as direct payments to farmers.

“As we move forward, we think that those areas of spend should alter,” he said.

“However, it is clear that politics is extremely volatile. We will not know what the environment will look like by 2020, so we have to be fleet-footed and keep our options open.

“Our thinking is that, if we have what could be seen a hostile backdrop (with regards trade, labour availability and regulation), then dealing with volatility will be the top priority.

But if we have a benign outcome, then productivity and environment will be able to take up a much larger part of the budget.”

NFU Brexit director Nick von Westenholz agreed that having the three-pronged approach gave a framework to develop different policy options, which would be prioritised as the terms of the UK’s exit from the EU became more apparent.

The NFU has emphasised that the three-pronged proposal is being developed by the NFU, rather than by Defra, so it is not official government policy.

It remains to be seen how it will be viewed by ministers – as well as other organisations with rural interests.

That said, the proposals echo suggestions by Defra minister George Eustice that a future system of post-Brexit support should move away from direct payments toward targeted measures that more effectively encourage productivity, protect the environment and mitigate volatility.

The amount of money under each category would vary according to the Brexit deal finally negotiated by the government.

A good deal, enabling farmers to generate an income from the marketplace would allow more money to be directed to the environment and productivity.

But NFU president Meurig Raymond warned: “If we get a bad deal for farming, then measures to manage volatility – such as direct payments – will be an even more crucial element in helping farm businesses remain viable in an uncertain world.”

The proposals will be discussed at meetings with farmers, other industry groups and rural stakeholders over the coming weeks before being presented to ministers.