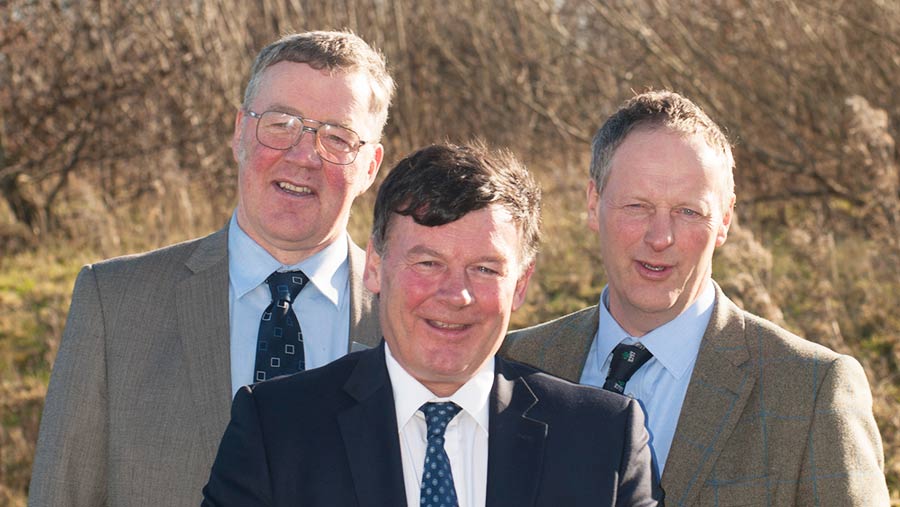 NFU Scotland president Allan Bowie, who completes his first two-year term at the annual meeting in Glasgow on 7 February, is to be challenged by both his vice-presidents, it has emerged.

Andrew McCornick and Rob Livesey have both put their names forward for the top job and, as a mark of their ambition, neither are standing for re-election as vice-president.

All three were at a pre-Christmas press briefing in Edinburgh on Wednesday (14 December) and, despite talk of all being part of a team, it was clear that the competition to lead the 8,400-member organisation will be strong.

“I have delegated a lot to my vice-chairmen and committee chairmen over the last two years and I am looking forward to still playing my part,” he added.

At the election, Mr Bowie will need to secure 50% of the ballot in the first vote if he is to be re-elected.

The 110 members of council act as an electoral college, each voting on behalf of their branches.

Making his pitch, Mr McCornick, who has been a vice-president since February 2015, said: “I have enjoyed being part of the team, but I want us to be a bit more robust and better at engaging with the membership.

Mr Livesey, who has served as a vice-president for four years, said: “I am not going to criticise what we have achieved as a team, but I think the membership expect a vice-president to move on up the chain.

“This is not an episode of The Apprentice, where people give an inflated view of themselves. I would be uncomfortable with that, but I do have ideas that I believe will be best for the membership.”

Rob Livesey is a tenant farmer at Firth near Melrose in the Scottish Borders. On 243ha at his home farm, plus another 81ha nearby, he runs 1,100 Mule ewes and 80 Salers single sucklers.

He was Livestock Committee chairman before being elected as NFUS vice-president in February 2013.

He became involved in the consultations on Nitrate Vulnerable Zones in his home area before becoming regional board chairman for Dumfries and Galloway. He was elected vice-president in February 2015.

Tom French farms 81ha of upland at Crawfordjohn, near Biggar, where he produces suckled calves for sale as stores.

He is considering stopping growing barley for home feeding and using the land for a sheep enterprise. He has been regional chairman of Forth and Clyde NFUS since 2012.

He is in his second year as chairman of the union’s Less Favoured Areas Committee.

Gary Mitchell operated West Galdenoch, near Stranraer, as an arable and beef farm until 2007 when he switched to dairying. Starting with 130 cows, he now milks 800 cows on 304ha of tenanted land.

He was NFUS Milk Committee chairman from 2012 to 2014 and has been Dumfries and Galloway regional chairman since 2014.