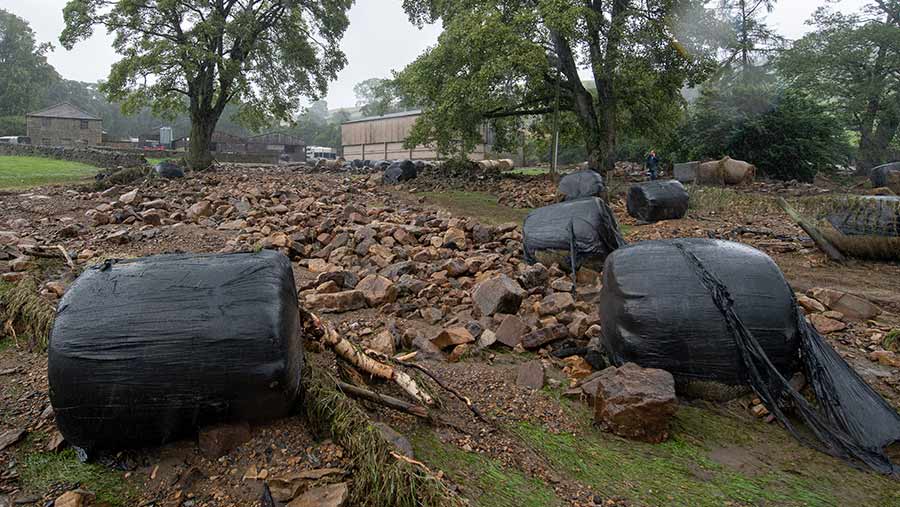 Farmers in North Yorkshire have been left counting the cost of the rain deluge that flooded fields and roads, destroyed bridges, drowned livestock and ruined feedstuffs.

Reports suggest 50mm of rain could have fallen in about an hour on 30 July (Tuesday), causing flash flooding, with farmers near Reeth and Leyburn particularly badly hit.

As emergency repair work and the clear-up continues, the farming community are uniting to assess the damage and make plans.

“We’re trying to get a handle on the level and extent of farmers affected – we don’t know at this stage if it’s 20 or 30 farmers very badly affected or if it’s 200 affected to a lesser extent,” said Adam Day, of the Yorkshire Dales Farmer Network.

On world #rangerday we’ve been out assessing the devastation of yesterday’s flooding in #Arkengarthdale & #Swaledale. There’s a lot of work to do but people’s homes & farms must be the priority. Please be careful walking and riding in the area, many paths will be impassable. pic.twitter.com/KKshjrgGdA

The area hit may not be as widespread as that ravaged by Storm Desmond in Cumbria in 2015, but the effects on some farms may be “every bit as devastating”, said Mr Day. “I know one farm has lost 90 sheep.

“Being flooded is awful and, in addition to the financial costs, these devastating flash floods will have an impact on the welfare and wellbeing of farmers.”

Various organisations and charities – including the NFU, Forage Aid and the Yorkshire Dales National Park Authority – are already working together to respond – recording the damage and exploring options for emergency funding for those affected.

Matt Neale of the Yorkshire Dales National Park Authority is advising farmers to take photos and video of the damage, which could be useful in insurance claims and in terms of accessing any potential emergency support.

Farmers are suggesting the floods were the worst in the area “in recent memory – certainly for the last 30 years”, according to Mr Neale.

“There were big silage bales getting washed down the road over cars in Reeth on Tuesday night and there are silage bales stuck up in trees now where they’ve been deposited and the river level has dropped.”

In terms of assessing the damage, everyone is still “really only still just scratching the surface”, but as well as lost stock and fodder, damaged roads and bridges will lead to time-consuming and costly travel diversions for the farming community, he added.

According to the government, the flood warning was no longer in force for Arkle Beck at Reeth and Low Fremlington at 12.30pm on 1 August (Thursday), but it suggested further heavy showers were possible in the area over the coming days.

With reports of roads, walls, winter fodder and some livestock being swept away by the flood water, the NFU is putting its emergency contingency plans into effect.

The union urging flood-hit farmers to register with them for recovery advice and assistance by calling its national CallFirst number – 0370 845 8458.

The NFU in the North East is building on its initial support for flood-affected farmers in the Yorkshire Dales as work begins to help the area recover from the devastation caused by Tuesday’s (30 July) flash flooding.

“Dales farmers are incredibly resilient, but they will need help to deal with the immediate and longer term complex impacts of this extreme weather event,” said Adam Bedford, NFU North East regional director.

Meanwhile, the Met Office said the latest analysis of temperature records provided further indications of a changing climate, with all of the UK’s 10 warmest years since 1884 having occurred since 2002.

Contact the Yorkshire Dales Farmer Network to help them build a picture of the losses on admin@thefarmernetwork.co.uk or by calling 01768 868 615.

The CLA has written to Defra farm minister George Eustice, calling on him to support those affected by the flash flooding that affected parts of Upper Swaledale, Arkengarthdale and Wensleydale on Tuesday 30 July.

1. The Environment Agency to issue immediate licences for affected farmers and landowners to realign watercourses where they have been changed by the floods, and remove boulders, drifts of sand and gravel and other debris from grassland, to enable it to be returned to its previously intended use.

2. Environmental Stewardship project officers to start immediate farm visits to agree with affected farmers on how any works to rectify damage will be undertaken and to issue appropriate derogations where such work would otherwise be in conflict with their agreements.

3. Defra to issue a notice of force majeure to farmers who have been affected by the floods in such a way that impedes their ability to meet cross-compliance rules for the Basic Payment Scheme.

4. Defra to set up a fund (much as was done in Cumbria in 2015 in the wake of Storm Desmond) to provide financial assistance with costs in rebuilding dry stone walls, clearing sand, gravel, boulders and other debris from fields, drying out buildings, realigning water courses and replacing damaged infrastructure.