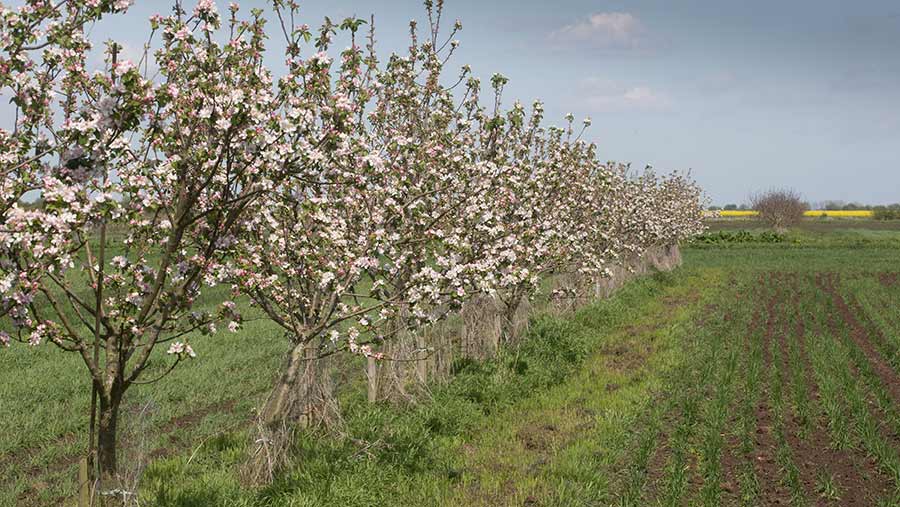 Traditionally there’s been a hard separation between the disciplines of agriculture, horticulture and forestry. You focus on one and you don’t mix.

This mindset has been reinforced by the Common Agricultural Policy and the lack of clarity over whether grants may be lost as a result of introducing trees on to land used for agriculture.

Furthermore, there have been only vague promises so far from government on “public money for public goods” as part of its plan for post-Brexit agriculture.

But now, our new reality is shaped by the ratcheting up of the need to reduce greenhouse gases and increase carbon storage, with pressure from both government and public awareness.

This has been backed up by sector initiatives, like the NFU’s goal of achieving “net zero” carbon emissions by 2040.

Whatever form Brexit takes, the drive to carbon-neutral agriculture is providing a new impetus for changes to the nature of British agriculture. More specifically, there’s the urgent need for more tree planting.

Intensive arable and livestock systems can produce high yields per unit of area and labour, but they can also have the kinds of negative environmental effects that will increasingly need to be accounted for

Scientists internationally have argued that this is the most effective, cheap and straightforward way to absorb carbon on a vast scale.

The UK’s Committee on Climate Change wants 1.5 billion trees across the nation by 2050, equivalent to 30,000ha a year, noting that current levels of tree planting are falling well short.

Agroforestry ties together the loose ends of this picture.

It offers farm businesses a means of becoming net absorbers of greenhouse gases, a way to reduce pollution and soil erosion, to improve on-farm biodiversity – as well as the opportunity to maintain food production, secure price premiums and find new sources of revenue.

What’s needed is sensible land management, with eyes open to the benefits of integrating different forms of farming with trees.

Intensive arable and livestock systems can produce high yields per unit of area and labour, but they can also have the kinds of negative environmental effects that will increasingly need to be accounted for.

Some British farms are already practising agroforestry – free-range egg farms, for example – but the full range of practices and their potential tend not to be recognised.

Silvopastoral systems, such as wood pasture and parklands, which combine trees with livestock and can provide animal welfare benefits, are the most common form of agroforestry in the UK.

Sheep farmers in upland areas in particular are becoming more aware of the advantages of providing shade and shelter.

There are also silvoarable systems, which combine trees with arable and horticultural crops.

The other main form of UK agroforestry is the use of hedges, windbreaks and tree planting next to rivers.

Then there is “forest farming”, such as the harvesting naturally occurring speciality foods like mushrooms and honey, decorative and handicraft products, and mulches and botanicals.

And, of course, there’s the wood itself for fuel. The UK is currently one of the world’s largest importers of wood pellets (from the US, Canada and Latvia), for use as bioenergy feedstock.

The environmental benefits of agroforestry are clear and well-established, and will be the primary driver for change in coming years.

Although financial revenues and viability vary with the specific location and conditions, we can be certain that the increasing appreciation of the societal and economic benefits of agroforestry by farmers, policymakers, researchers and consumers will mean it plays an increasingly important part in future UK farm practice.

Dr Paul Burgess is reader in crop ecology and management at Cranfield University’s Soil and Agri-food Institute, and secretary of the Farm Woodland Forum. He is also co-author of The Agroforestry Handbook, working alongside the Soil Association and the Woodland Trust.