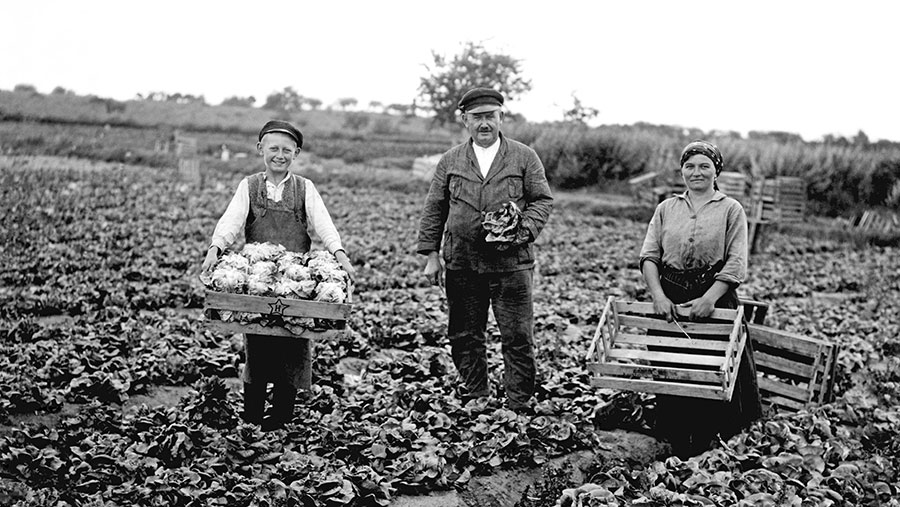 In 1917, at the height of the Great War, with 80% of the country’s grain and 40% of its meat being imported from other countries, and with German U-boats taking a grievous toll on merchant shipping, the British government was reluctantly forced into implementing agricultural support to quickly increase domestic food production.

The Corn Production Act 1917 guaranteed a minimum price for cereals until 1922, and the Agriculture Act 1920 further strengthened this with protection linked to production costs.

The stability ensured by this legislation gave much-needed confidence to farmers and drastically reinvigorated an industry that had spent decades in the doldrums as a result of the decay wrought by free trade, and rural communities around the country once again thrived.

See also: What was farming’s role in the First World War?

Until they didn’t. Because when trading eventually resumed after the war ended, the price of wheat halved, and in 1921, the Corn Production Act was quietly repealed, causing payouts to farmers to abruptly end.

Partly as a result of this, the industry rapidly went into outright depression, resulting in seismic cultural and social changes. It infamously became known as “the great betrayal” to a generation of country people.

Almost 100 years later, British agriculture now stands at another crossroads, and once again we are relying on the fragile promises of politicians to take us in the right direction.

While we have repeatedly been assured that the government will not compromise on food standards when it comes to future trade deals, a legal commitment has yet to be put in place to ensure that it will actually happen.

So, it was with more than a raised eyebrow that I watched Iain Duncan Smith and Liam Fox loftily dismiss concerns over US food practices such as chlorinating chicken and allowing a certain amount of fly eggs in drinks as “tired old lefty rhetoric” in parliament recently.

Contrary to what some would have us believe, farming in this country is an extraordinary success story.

Despite the challenges we’ve faced as an industry over the years, such as salmonella, BSE, foot-and-mouth, bovine TB, extreme weather and falling profitability, we have managed to not only maintain our world-famous landscape, but enhance it

Agri-environmental schemes are being enthusiastically entered into when they’ve been designed and administered correctly by our respective governing bodies.

We are rightly immensely proud of our animal welfare standards being second to none, with some of the most rigorous assurance schemes available anywhere applied as routine on British farms.

Though often immensely time-consuming and expensive, and with frustrating levels of paperwork involved, as an industry we have recognised the need for them and have acted accordingly.

And to top it all, we have helped to provide some of the highest-quality and most affordable food in the world, and by a distance the cheapest in western Europe, at just 8% of Britons’ total household income spend; a number that has more than halved over the past 60 years.

In short, we have achieved all that has been asked of us.

As a great figure of the 1920s, Groucho Marx, once said: “Politics is the art of looking for trouble, finding it everywhere, diagnosing it incorrectly and applying the wrong remedies.”

Let us all hope, for the sake of our communities, that history doesn’t repeat itself during the next decade.