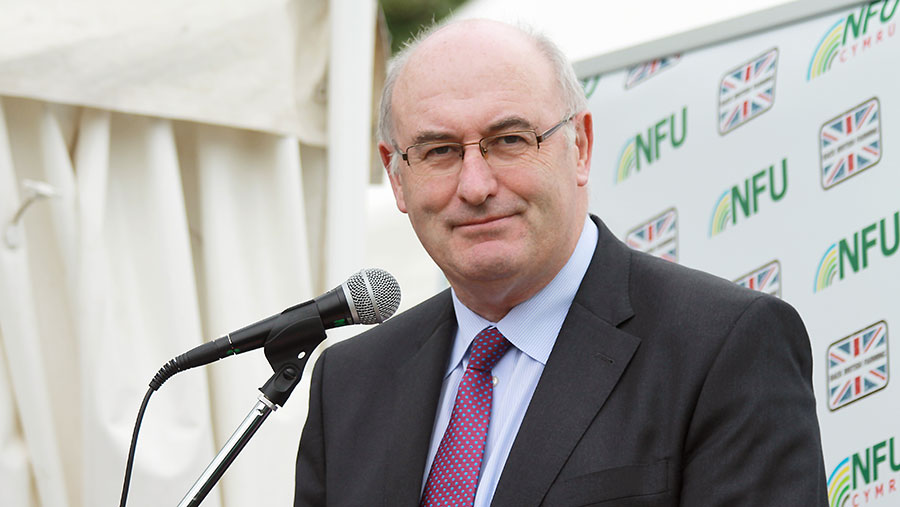 With Brexit now just three months away, EU agriculture commissioner Phil Hogan explains that, while the policies may start to diverge, the challenges facing UK and EU farmers have much in common.

The swirl of events sometimes distracts us from important questions.

In September, when Farmers Weekly invited me to contribute to its end-of-year issue, the timing seemed safe. The House of Commons would by then have voted on Brexit arrangements. Things would be clearer.

But, as I write this, uncertainty continues.

See also: Farmers advised to secure inputs ahead of Brexit

Our agricultural policies will begin to diverge, even if our basic concerns are identical.

Chief among them, apart from the stability and security of food supplies, are the incomes of farmers, the needs of consumers, the safety of food and climate change.

There are other concerns linked to these issues: access to the profession of farming for young people, environmental care and the socio-economic vibrancy of rural areas – to name just some of them.

Farmers are business people whose ability to deliver high-quality food and other public goods (such as a pollution-free countryside) depends on a healthy bottom line.

Now, less than a hundred days from B-Day, UK farmers are rightly taking stock of how life outside the Common Agricultural Policy (CAP) will affect their incomes.

It is in the strong interest of everyone that UK farmers retain a healthy bottom line post-Brexit. Indeed, this will be the measuring rod of withdrawal’s success – or otherwise.

As the UK leaves the EU, the average real income of farmers is on an upswing.

After falls in 2015 and 2016 (referendum year), figures for last year showed it was back close to its 2013 level, and current signs are that this year will be better still.

But the fortunes of farmers post-Brexit cannot be separated from the UK economy as a whole. If Brexit causes it to hiccup – as the UK Treasury and the Bank of England say it will – farmers will feel it, just like everyone else.

If it causes the pound to drift downwards, exporting might be easier, but imported inputs will eventually become more expensive – and the UK imports more agri-food products than it exports.

The bedrock of income support provided by CAP direct payments has given UK farmers the stability to move with the times, react to market signals, make smart investment decisions and plan for the future.

And it must be remembered that the CAP has also moved with the times.

The policy today is unrecognisable from the protectionist era of butter and beef mountains and milk and wine lakes that existed when the UK first joined with Ireland and Denmark in 1973.

In truth, the CAP has evolved in the direction of UK agriculture – and is set to go on doing so. After 43 years it is as much a UK invention as an EU invention – although public opinion in the UK still does not recognise the fact.

The CAP is also far more flexible, with more decisions being taken at national and regional level.

It is today more true to speak of England’s, Scotland’s, Wales’s, and Northern Ireland’s agricultural policies within the EU framework, than it is to talk of the “Common” Agricultural Policy.

The truth about farm incomes

Despite the variations in the way direct payments are made in England, Scotland, Wales and Northern Ireland, there remain a number of stubborn truths about UK farm incomes.

Average real income is volatile and is significantly lower – about a third less on average – for cattle and fruit producers.

Also, the relative position of UK farmers in the food chain is low. They command between 10% and 12% of value-added and their share is declining.

By contrast, farmers in the EU 28 averaged about 24% in 2016. Strengthening the farmer’s position in the food supply chain has been a priority for the EU, and we have made proposals to outlaw certain unfair trading practices across Europe.

Indeed, the UK’s Groceries Code Adjudicator has been a good example of best practice to follow.

Income stability and farmers’ share of the value chain are concerns for the whole EU. They will be given greater focus in EU policy after 2020, along with the need for generational renewal.

There are other differences. England has not introduced any other adaptations in the way direct payments are made.

But Wales seeks to help smaller holdings by increasing payments for the first 54ha, while Scotland provides coupled support for beef, sheep and goat producers.

Northern Ireland provides a higher amount of support under the payment for young farmers.

This decentralised philosophy is a key part of the EU Commission’s proposal for CAP reform.

The EU has learned the lessons that many farmers, including in the UK, have been pointing out for some time – keeping a level playing field does not mean that all EU member states must do things in the same way and at the same time.

Our experience with “greening” has opened many eyes. The idea of tying farm payments to good environmental practice is sound – and we will take it a stage further in the policy reforms we have put forward.

But the way “greening” took place was all wrong. It ignored the day-to-day reality of farming: that conditions vary between farms, let alone countries.

Our policy was too prescriptive in its “one size fits all” approach and too narrowly based on predetermined “good practice”.

In the new-look CAP, after 2020, member states will buy into EU climate objectives and a menu of possible actions. But, within this policy framework, they will be free to decide their own pathway.

The EU will not try to define the width of a hedge. Instead, we will switch the focus to delivering measurable performance and results in relation to air, water and soil quality.

In effect, EU support for farm incomes will continue and will hold its emphasis on the climate requirement.

But bureaucracy will be streamlined, and it will be easier for farmers to do what’s necessary to access their direct payments.

UK farmers will leave the CAP in March, but they will not leave EU trading arrangements until the end of 2020, when they will cease to be part of the world’s biggest trading bloc.

Here again I expect that the UK and the EU will continue along similar routes, keeping their emphasis on food quality and safety.

In trade terms, maintaining frictionless trade with the EU is important to UK farmers’ bottom line.

This is something recognised by UK farmers’ unions, which say that free and frictionless trade with the EU 27 is “absolutely critical”.

We are approaching the moment when our paths will diverge. After 29 March 2019 the duty of supporting UK farmers’ efforts to achieve a fair standard of living will pass to London, Edinburgh, Cardiff and Belfast.

Withdrawal means that the UK’s overall agricultural framework could change, especially after 2022.

But the problems facing UK farmers, despite the UK’s different farm structures, are broadly speaking the same as those facing the rest of the EU.

And the range of available policy responses is similar. So, perhaps the policy framework will not change abruptly.

As an Irishman, I shall be sad at our parting. We have walked hard miles together. No policy is perfect, but the CAP has demonstrated adaptability and a capacity for positive change.

I hope that, whatever path the UK chooses, our agricultural systems will remain closely aligned, delivering benefits for our farmers, citizens and the environment.

May the road rise up to meet you.