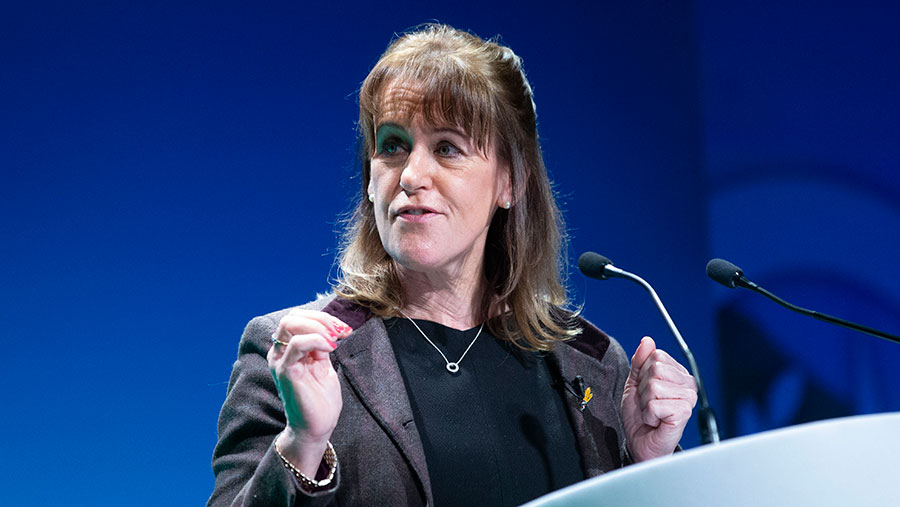 Minette Batters and I have both been on BBC Question Time in the past fortnight.

Minette graced Buxton in Derbyshire, whereas I made my appearance when it was broadcast in my hometown of Harpenden, Hertfordshire.

Well, I say we were both “on” Question Time. While Minette was rubbing shoulders with the likes of James Cleverly, the Tory party chairman, and Fiona Bruce, my appearance was a little more fleeting.

The camera panned the audience throughout the show and, on one brief occasion, caught a glimpse of the bald patch on the back of my head.

Minette is a class act. That said, it must have been quite daunting as a panellist debating HS2 and the trans-Pennine railway for the first 20 minutes on air – a far cry from bovine TB and NVZ exemptions, for example. But she fielded it most adeptly.

My own performance, sitting in the audience being told how to behave, wasn’t a Warhol moment.

Minette’s scragging of Cleverley, holding him to account over an issue that resonates with everyone, not just farmers, was first class

There was no 15 minutes of fame. Sadly, I was unable to shoehorn my question into discussion of Donald Trump’s impeachment, MPs’ dress codes or terrorist release dates.

It was evident that the producers of the show will select at least one question to suit each panellist.

Minette’s opportunity came in her exchange with James Cleverly, pinning him repeatedly on the government’s resistance to impose legislation to uphold British food standards on imports.

Cleverly floundered, squirmed and evaded. Fiona Bruce weighed in and added to the pressure.

And what we learned from that two minutes was gold dust. Minette’s scragging of Cleverley, holding him to account over an issue that resonates with everyone, not just farmers, was first class.

But the real win came when Fiona Bruce endorsed and enforced Minette’s point. An impartial individual with credibility hammered home the argument, and the impact was exponential.

This made me reflect on Defra secretary Theresa Villiers’ speech at Oxford.

“In 2021 we will start to reduce direct payments and that money will be used to launch the national pilot for an Environmental Land Management (ELM) scheme, our reform based on public money for public good,” she said.

“Those that use the new support scheme will have a big say in shaping it.”

To shape and plan we need information. Soon, not in 2024.

We should engage members of the public

As we learnt from Question Time, we should engage impartial members of the public to guide and endorse the public good alongside us, the farmers.

This is precisely the remit of Henry Dimbleby’s National Food Strategy. However, while the White Paper responding to his strategy will influence policy, it will not bring recognition and emotional buy-in from the public.

British farming should wrestle this initiative by co-ordinating the local “buy-in” and, with it, goodwill and understanding in our local countryside.

There will be no value placed on public goods if the public doesn’t know about it.

Farmers could form clusters and hold open events. Invite local people and share with them what the ELM options are and ask what they would like to see in the farmland surrounding their town or village.

Farmers could set the parameters and budgets and bring in experts to offer independence. For example, it wouldn’t necessarily offer access, if this were against the farmers’ wishes.

We all fear the unknown. However, proactive adoption of ELM could be an extremely positive way to put our farms back at the centre of our communities.