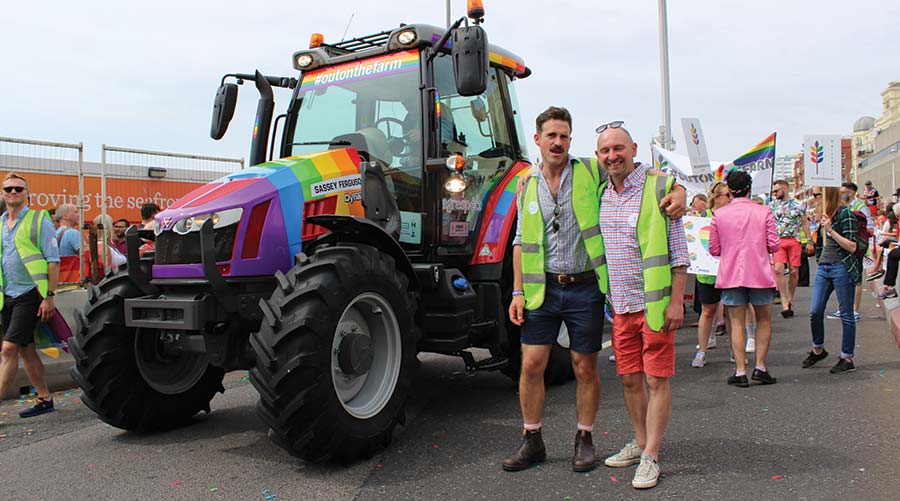 A couple of weeks ago, I had the best experience of my life involving a tractor. First, though, I need to do a bit of a build-up to explain how it came about.

Over the years I have done a lot of different things to promote British agriculture.

I’ve spoken at secondary school careers fairs, taken assemblies in primary schools wearing wellies, given talks to the WI and faced drunken Round Tablers with my unfunny after-dinner speeches.

I say this not to tell you what a hero I am (you know that already).

I just want to show that I speak from experience when I say that lots and lots of people in this country aren’t particularly bothered about agriculture.

This is one of the reasons why last year I helped to start an organisation called Agrespect.

It was created to make all members of society feel equally welcome in the countryside regardless of their gender, ethnicity or sexuality.

We all know that the farming industry still harbours a few people with unpleasant sexist, racist and homophobic opinions, which make rural areas seem unwelcoming to a large percentage of modern society.

As a way of challenging this, we decided to put an Agrespect entry in Brighton Pride parade.

Agco generously provided us with “Sassey Ferguson” – a cute, rainbow-emblazoned 5713.

The crowds are 10 people deep for two miles. The event isn’t just about being gay; it’s a joyful celebration of acceptance and loving people for who they are.

Each of us care passionately about the industry but, being farming types, are not especially flamboyant.

Most of us were wearing checked shirts and, if I’m honest, we all felt pretty uncomfortable about the whole set up.

But the minute the parade started, something magical happened. The crowds erupted when they saw the tractor.

So unexpected was the sight of a farming entry, that people went wild. People were screaming “we love you farmers” for three hours.

I wish that everyone could experience the sheer joy of being cheered and high-fived for that length of time just for being a farmer. It was phenomenal.

It made me realise how much easier it is to deliver a farming message if we do it with a sense of fun and on society’s terms rather than on our own.

Too often we launch publicity campaigns that are hectoring instructions to “Buy British” or self-righteous propaganda saying how the public would die of starvation without us.

What we demonstrated at Brighton Pride is that it’s enough just to show that the farming industry is made up of relatable and honest human beings.

It felt like we were building relationships with urban communities.

This is a powerful way to earn trust and to attract people into the industry who might not have considered it before.

So, if you want to get involved, Agrespect is planning to be back at another Pride event next year with an even bigger and better display.