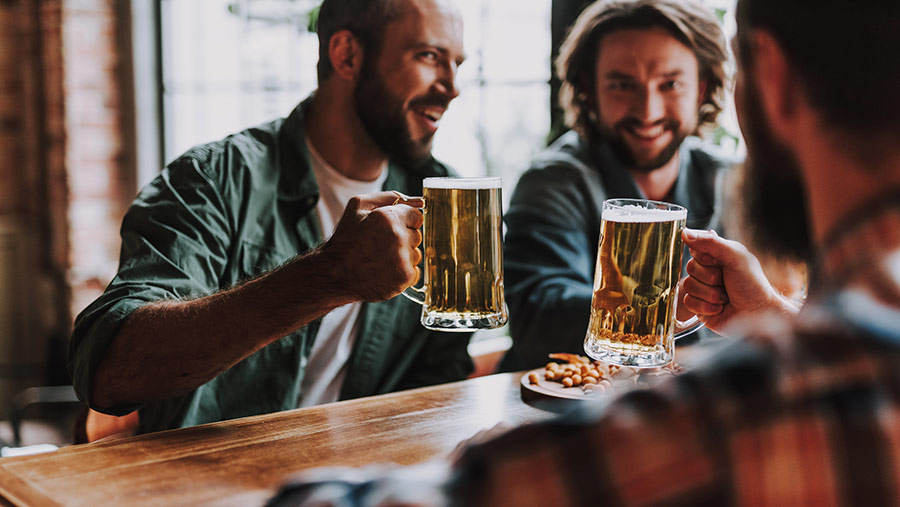 As Santa starts to polish his sleigh and the prospect of Christmas cheer comes into view, the call of the pub gets ever louder for some of us in the farming community.

Of course, there’s plenty to discuss while doing one’s festive bit to increase the demand for malting barley.

That old favourite topic of conversation – pub yields – are now yesterday’s news. Instead, there are a couple of livelier issues primed for a few fisherman’s tales around the saloon bar.

The first is the current price of grain. The chat goes something like this. “I was bid £260/t the other day,” boasts Farmer Brown.

“That’s not bad for feed wheat,” replies Farmer Smith, adding: “It makes me think the £280 offer I got for my milling this morning might need a sharpener.”

And so the inflationary chatter goes on. By the third pint, the wheat price has broken through the £300/t barrier and is heading ever skyward.

Meanwhile, over in the public bar, it’s the price of fertiliser that is creating more heat than light.

“I’m glad I bought 100t of AN back in July. It’s worth twice the price now,” enthuses Farmer Giles.

“That was a shrewd move,” agrees Farmer MacGregor. “I’m just relieved we kept back 200t of urea from the year before last. The only trouble is, it’s worth so much we’re having to employ Securicor to look after it.”

By the time the whisky chasers are ordered, it turns out that a significant part of the nation’s fertiliser needs can actually be found sitting in the barns of the local parish.

As for me, I’m avoiding the boozer… because of the bloody Russians. I appreciate that some will dismiss this as whimsical paranoia, but I’m increasingly convinced I’m being monitored by the Kremlin. The evidence is becoming compelling.

A couple of weeks ago, I sold a sizeable chunk of my harvest and the very next day Moscow announced an export tax on wheat, no doubt concerned that the strategic reserves held in my grain store were now significantly depleted.

Obviously, my frustration was largely down to the fact that, not long after the moment I made the sale, this Kremlin meddling caused the grain price to rise, thereby making me rue the deal.

But this isn’t the first time I’ve felt the disruptive paw of the Russian bear on my shoulder.

In August I was offered a couple of loads of fertiliser at a price that at the time looked a little high; I seem to remember it began with a three…

Sure enough, once I had declined the deal, at the speed of a direct call to beyond the Urals, president Putin started messing around with gas supplies, causing the fertiliser price to climb to astronomic levels.

Once again the leaking of my business dealings to a spy satellite last seen over Clacton has picked my pocket.

On that note, I’ll wish you all the seasons’ greetings (if it’s not too soon). Remember to be careful of too much festive pub talk. Those two burly gentlemen last seen propping up the back bar are probably called Vladimir and Boris.