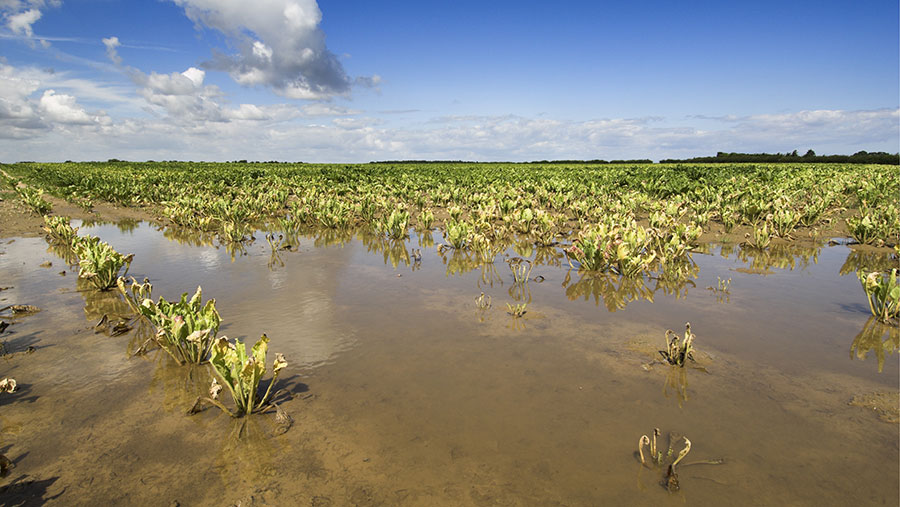 As you probably know, I farm in East Anglia, the “driest” area of the UK. So, you might think we have escaped the worst of the wet weather. You’d be right.

That said, I have never seen our farm look as bad as we emerge from the winter.

We have wheat crop failures where the seed appears to have been “drowned”; some part-drilled fields where, in places, the land was too wet to carry a tractor; and some fields not drilled at all.

See also: Why wheat growers may need to target mildew this spring

We have about five acres of sugar beet that the contractor could not harvest because the soil was so soggy.

If he can’t get them out before the sugar factory closes, we’ll either have to plough them in or try to borrow someone’s sheep to graze them off.  We’ve never seen that field flood before.

All we have is Defra secretary George Eustice spouting Boris-based platitudes and waving a few quid, while the rest of the government spreads cash like confetti

Then there’s the rape. Drilled without the protection of neonicotinide seed dressing, of course, we have lost more than half our acreage because of flea beetle damage and/or too much rain. Many of our neighbours have lost all of theirs.

I understand UK rape crops are expected to yield a total of less than 1m tonnes this year, which means that, to satisfy domestic requirements, we will have to import another 1m tonnes from abroad (grown, of course, with the benefit of neonics).

I apologise to those across the rest of the UK, many of whose farms have been flooded for weeks, if not months. They are much worse off than we are.

Indeed, in most countries faced with such a catastrophe, a state of emergency would have been declared, with measures announced to help.

All we have is Defra secretary George Eustice spouting Boris-based platitudes and waving a few quid, while the rest of the government spreads cash like confetti.

I am, of course, aware that we are supposed to be optimistic about the opportunities presented by leaving the European Union.

But that is difficult to manage given the situation described above. For, inevitably, on many UK farms, 2020 will be a financial disaster.

And it won’t all be over in a few months. At a time when we are being urged to improve our soil structure, many of us are facing the worst soil damage for years.

Whether by deep “wheelings” from harvesting potatoes or sugar beet while the land was too wet, or simply because of waterlogging or outright flooding, it will take a few seasons to put things right on many fields.

And we have been warned to expect regular repeats of the kind of weather we’ve experienced. Sounds like some big challenges ahead.

Maybe part of the answer lies in light, robotic tractors. I know they have been written off as toys by some who have continued to develop bigger and heavier equipment.

But if we are to have a succession of wet autumns and winters, we are going to have to learn new skills and use new methods.

Meanwhile, let’s hope the trade deals supposedly being negotiated on our behalf enable us to survive the planned basic payment cuts, thereby giving us time to adjust and change.