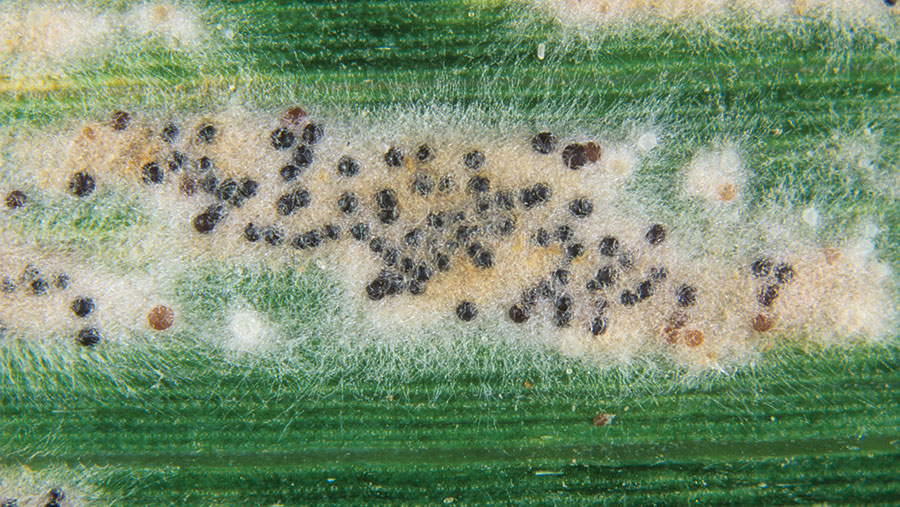 The increased risk of mildew in this year’s wheat crops means growers may need to adopt a targeted treatment in the coming weeks, if they are to avoid the potential yield losses of up to 20% in susceptible varieties.

Powdery mildew is not a disease on every wheat grower’s radar when formulating fungicide programmes in a typical spring.

However, the very wet growing season has pushed drilling dates back, thus increasing the risk.

Powdery mildew in wheat is a visual disease and often its alarming appearance doesn’t always translate into significant damage.

However, there is increased concern among experts and agronomists about its potential effects this season, because many growers have a higher proportion of their wheat drilled between November and the end of February.

Niab cereal disease expert Bill Clark says that in these late-drilled wheats powdery mildew is much more of a concern, although scientifically it isn’t fully understood.

“We think it is down to slow early growth and plant stress. As these late-drilled wheats are usually stressed, they tend to pick up more mildew, so this year it could be a bigger problem,” he explains.

Intense rainfall seen through winter and spring has been a good suppressor of mildew infection, washing spores off leaves.

However, this is now being offset by mild temperatures and when drier spring weather arrives, the moderate levels of mildew reported in crops could quickly explode.

Adding to this risk is the fact that varietal resistance scores for mildew have been falling, with the average score on the 2019-20 Recommended List lower than it was five years ago.

A handful of varieties have scores between 3 and 5 (see “Winter wheat varieties with low mildew resistance (2019-20)).

Mr Clark says those growing very weak varieties such as Leeds (3) will be aware of the risk, but the mid-range varieties may lull people into a false sense of security in terms of controlling mildew.

“Late drilling changes the resistance ratings and I think you just have to treat what you see this season.

“You could have a variety with a score of 5 and it might easily be as susceptible as a 4 when drilled late,” he explains. 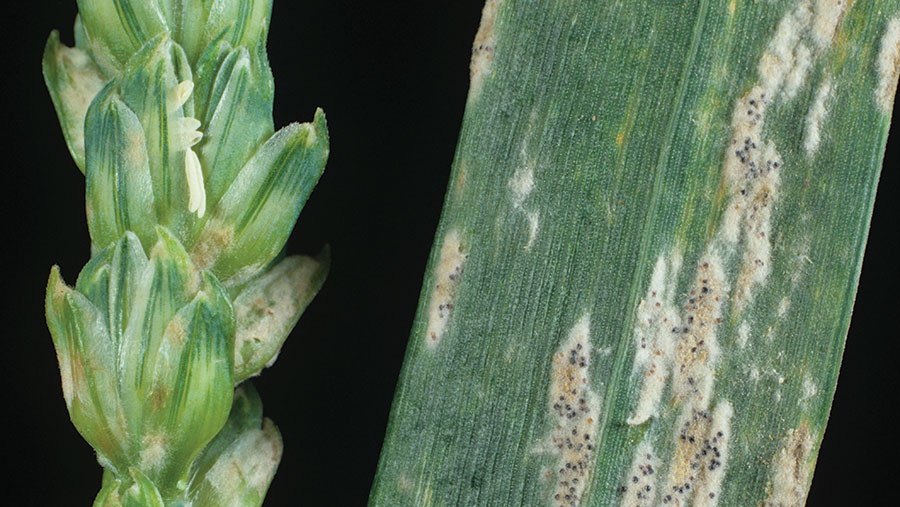 Mr Clark highlights that the mildew threat could be compounded by growers’ attitude to disease risk this year, with potential disease pressure being talked down by some due to the later drill dates.

This is certainly the case for septoria, as later sowing is proven to be a useful cultural strategy to reduce levels of infection heading into the spring.

Lower septoria pressure, twinned with lower yield potential, may see growers tuning down or leaving out the T0 spray altogether and opting for a cheap and cheerful fungicide mix at T1.

Where applied, chlorothalonil will inevitably be growers’ go-to T0 option this spring, as they have plenty of the multisite fungicide in their stores because it is its final season of use. However, Mr Clark warns that it offers no activity on mildew.

“I’ve also heard talk of just a cheap azole and chlorothalonil being used at T1 and that isn’t going to suppress mildew enough either,” he warns.

When planning a strategy for mildew, Mr Clark explains that of the fungicide options available, only prothioconazole from the azole group and all SDHI actives provide useful protection.

Where other azoles such as epoxiconazole are favoured, an SDHI component to mixes will be required for any level of mildew protection at T1.

“If people are using reasonable fungicide programmes early on, including prothioconazole or SDHI mixes, then it really shouldn’t take hold,” he explains.

While this might be adequate in some situations, Mr Clark sees a case for a specific mildewicide if pressure is high.

“I think these late-drilled crops will go through their growth stages very quickly this year, so holding off on a T0 and using a decent SDHI/azole mix at T1 may well be enough.

“But if it really is getting away from you, then growers will have to consider a specific mildewicide like Cyflamid or Talius at T0 or add one to the T1 spray,” he adds.

In Kent, CCC Agronomy adviser James Rimmer says about half his winter wheat acreage is in the late-drilled category this year, so he doesn’t see septoria being the major issue it can be.

Instead, his focus is on mildew and rusts and he will be aiming to keep on top of both diseases early on to protect crop biomass and prevent plants from losing tillers.

With an eye on keeping costs down in crops with less potential, he says keeping mildew out early using a preventative approach will be the most cost-effective route in the long run.

This will involve using a specific mildewicide at T0 in situations where a variety is weak against mildew and the disease is likely to develop.

“Specific mildewicides are reasonably expensive, but when used early, they stop you having to come back later and chase it. I’ve found that if you take it out early, you rarely have to come in again with a bespoke mildewicide,” notes Mr Rimmer.

There are a handful of protectant mildewicides available for 2020 that Mr Rimmer may opt for, including proquizanid, metrafenone, fenpropidin and fenpropimorph, but all will have limited knockdown effect.

If mildew is established at T0 and knockdown is required, the curative and protectant cyflufenamid is also an option, says Mr Rimmer.

“Where you miss the T0 and mildew is still active, a prothioconazole-based mix at T1 with the addition of a mildewicide may be necessary to clear it out,” he adds.

Further west, AICC agronomist David Lines covers Herefordshire and Shropshire and also sees mildew as a threat, along with yellow rust, in late-drilled or weak varieties.

Many of his clients’ wheat variety choices have good resistance to septoria and this has enabled them to cut out a T0 fungicide in recent seasons.

This spring will be similar, with a septoria-active T0 not planned in many situations, but if mildew or rust is active in backward wheats, he will be adding disease-specific fungicides to a first plant growth regulator (PGR) at growth stage 30.

Where yellow rust is the only concern, he would lean towards Amistar Opti at a low rate, but if mildew is also present, he would use Cyflamid with the addition of tebuconazole to cover both.

“The beauty of Cyflamid is that it’s a very good eradicant product. From experience it clears mildew out and keeps it out. I’ve rarely had to use an alternative mildewicide as a follow-up spray,” says Mr Lines.