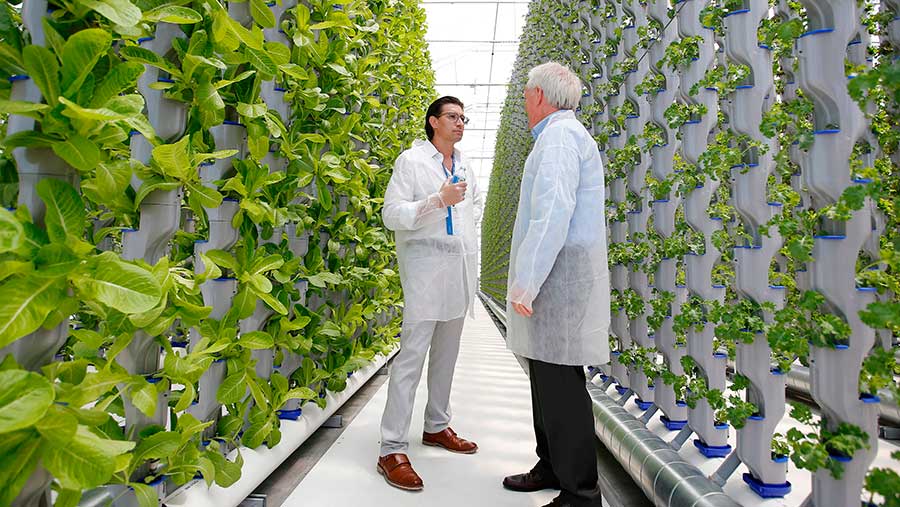 For fear of stating the obvious, the thing about the turn of a decade is that it marks time. Suddenly we are not in the twenty-somethings, we’re now in the twenty-twenties and, somehow, the future seems a whole lot closer.

We are racing into a new decade where the art of the possible encourages radical new thinking.

Sure enough, right on cue we have a number of commentators in our media talking about a radically different vision for agriculture, where what was until recently a futuristic pipedream is now deemed within our grasp.

See also: Why ‘vertical’ farming is growing in the UK

Amid all this heated talk of transforming the way we produce food, one phrase I’m hearing more and more is “vertical farming”.

Indeed, no less a figure than the ex-chief scientific adviser to Defra, Professor Sir Ian Boyd, has been waxing lyrical about how our food will increasingly be produced in vertical farms in urban tower blocks rather than in the countryside.

Prof Boyd thinks this an excellent improvement because he’s rather sniffy about what farming currently does to our green and pleasant land – which he thinks is no longer very green or very pleasant.

In short, he thinks food production ruins the countryside as it spoils the view, destroys the wildlife and pollutes the place.

So, the sooner food production is moved from the great outdoors to the great indoors, the happier he will be.

I don’t really want to spend too long refuting the notion that, as a farmer producing food, I’ve thoroughly spoilt my backyard.

Suffice to say I spend a lot of time walking around my farm and I’m very proud of it as a patchwork of fields, hedges, copses, ditches and biodiversity. Every calendar year we count the different species of bird we see on the farm, and in 2019 spotted 103.

But it’s the idea that food should be increasingly grown in urban tower blocks that I really question. I’m not totally dismissive of the idea – I’m not from the “but how would the combine get up and down the stairs” school of thought.

I accept that for high-value niche crops such as fresh herbs, it can just about make sense to grow them under LED lights in Catford.

But – and it’s a big but – the very idea that staple crops such as cereals that provide the bulk of the calories keeping humanity alive can be grown in tower blocks rather than on the broad acres of the countryside is rather fanciful.

More generally, you have to question how artificial light and irrigated water can be a more efficient use of resources than natural sunlight and rainfall.

What’s more, the last time I looked the price of urban building land was more than a hundred times that of farmland.

Even if you built your farming tower blocks 50 stories high, it would still make a poor use of land in metropolitan areas best designed to house people in a country short of housing.

So, as we enter a new year called, rather inspiringly, 2020, I am relishing the thought of taking my farm into the adventure of a new decade, but my newfound 20:20 vision doesn’t involve a perspective from anything high rise.

I’m keeping my feet firmly on the ground.